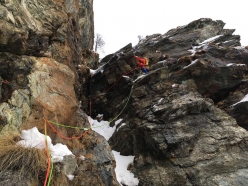 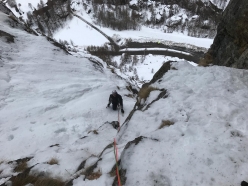 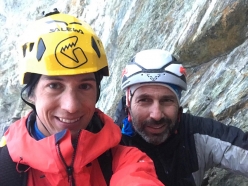 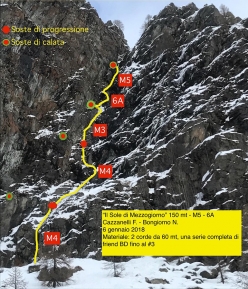 Certain lines, you know, need to be climbed immediately. In particular if they are mixed outings, because they might be here today and gone tomorrow. There’s an obvious corner that splits the Singlin rock face in the Aosta Valley, and for the last couple of years I’ve been figuring out how to climb it. This striking line seperates a compact section, which hosts some summer multi pitches, from its more jagged and discontinuous righthand side which hosts different climbing sectors.

On 6 January I teamed up with my good friend and longtime climbing partner Nicolò Bongiorno as we’d planned to climb an icefall. The recent rise in temperatures didn’t bode well, nevertheless we decided to check out what was in condition in the Valtourneche valley. As we drove out of the tunnel at Singlin I glanced up as usual at the corner, but this time something made me stop. Thanks to the heavy snowfall the route seems in excellent condition and I immediately realised the time had come to give it a go.

Nico agreed and we scoped it out through our binoculars. It was warm but cloudy, snow was forecast in the evening, so I was sure the wall wouldn’t receive the sun all day long. We racked up and started to wade our way to the base of the route; had there been no snow we’d have been up there in no time, but with all that deep snow the approach proved complicated. We started climbing below the most obvious section and the route turned out to be fun but, unfortunately, difficult to protect. Thankfully I’m fairly experienced at climbing on the Valtourneche serpentine rock and I knew what I was letting myself in for.

The first two pitches ran smoothly while the third, despite being technically easier, proved difficult to protect (3 friends in 50 meters). The last pitch was the crux. Because of the poor ice I broke out from the corner, climbed past an arête and then tackled some steep rock. From there I returned to the corner that continued easily for a few meters before narrowing up towards the end. Some random sections led to a big tree where the difficulties ceased and we finished the climb.

Wrapped in fog and then beneath light snowfall we established the abseil belays and rappelled to the base of the route. Tired, soaked to the bone but happy we celebrated with a well-deserved slice of cake and cup of chocolate that immediately made us feel better again.

I would like to thank Nicolò for his tenacity and enthusiasm on this little adventure.