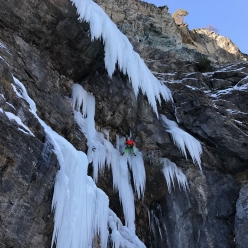 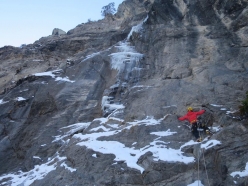 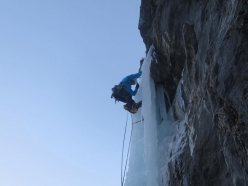 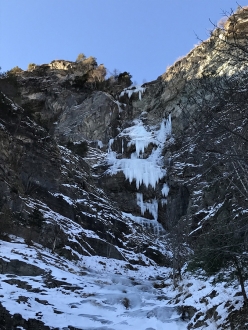 There are some routes just lie there, waiting to be climbed. Perhaps so obvious that, at times, that’s why they’re ignored. Perhaps this is what happened to the two ice and mixed climbs in lower Valtournenche; one of them even blatantly overlooks the Covalou power station, on the road that leads from Chatillon to Breuil-Cervinia.

François had never ignored these lines, for years he kept a watchful eye on them, waiting to seize just the right moment. The good conditions that came from the cold snap during the second half of January provided the perfect opportunity for this first ascent. François easily convinced me to prepared my gear and give it a go! We decided to use ice screws and trad gear wherever possible, and add bolts on unprotectable sections and at the belays.

On the first day we started up the most obvious line. At the base of the drip I decided to immediately start up the first pitch which had a couple of vertical ice "bubbles" that were linked by a traverse which initially offered delicate moves up technical ice before continuing past some physical mixed terrain (well protected with two bolts). From here it continued onto the upper curtain via a corner protected with friends with short screws. After more than an hour of "work" I placed the belay anchor and belayed François who reached me, excited about how beautiful the climbing was.

We easily climbed past the overlying ice and reached the base of the last pitch, dominated by huge fangs. We placed the belay in a comfortable niche, sheltered from everything above us! The next pitch belonged to François: he climbed up and left along an inviting ramp. What at first glance seemed fairly straightforward turned out to be extremely technical (protected by two bolts) and this led to a short section up thin ice (protected by short/medium ice screws). Here François dealt with a short, pumpy final traverse past delicate hooks and poor footholds and this is the only section where the he placed the some bolts fairly close together. François belayed me off a tree at the top of the drip and after a couple of rappels were retuned to the base and celebrated the first ascent of our Livello Inferiore.

The next day we decided to return and finish things off by establishing another new route. This time we were joined by Jules Pession who brought with him a good dose of motivation! François started up the first pitch: an initial section of mixed climbing up rock and extremely thin ice protected by friends and a few bolts led to thicker ice (protected with medium/short screws) before exiting up a technical mantle, once again on very thin ice (protected by 1 bolt). The result was some really great climbing, and when Jules and I joined François we were all elated. All we had to do now was climb the ice above that, despite its appearance, turned out to be vertical and delicate. Jules and I swung lead and after struggling with some complicated crust we managed to place the bolts at the last belay just before darkness set in. We abseiled following the lights of our headlamps and then, over a couple of beers, celebrated the first ascent of Nuovi Orizzonti, New Horizons!