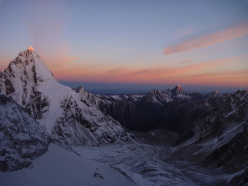 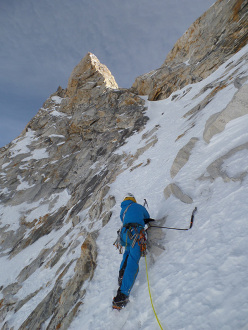 In October 2014 Simon Gietl, Daniel Tavernini and Vittorio Messini carried out a series of alpine ascents in the Minya Konka massif, Sichuan, China.

Acting on information from a 2012 German Alpine Club Youth expedition, this autumn Simon Gietl and Daniel Tavernini from Italy's South Tyrol and Vittorio Messini from Austria's East Tyrol teamed up to explore the Minya Konka massif in China's Sichuan region. The trio set off on 6 October from Munich to Chengdu and then Kiangding, from where their gear was transported with the help of 14 donkeys to base camp at 4000m.

The first objective was Little Konka, the 5928 high peak that dominates the valley. After some slight acclimatisation problems the trio set off on 17 October and established advanced base camp at 4600m. They departed at 4:00 the next morning and started up the NW face, through deep snow and against high winds and roped up on steeper sections to reach the summit at 13:00. After the obligatory summit photos they descended via the line of ascent to ABC. During the ascent they came across three belays and according to their research, these may have belonged to a Korean expedition that climbed the West Face, further to the right therefore, before abseiling down the more inviting NW Face climbed by the Tyroleans. Regardless of this (important) detail, the trio returned to BC the next morning and celebrated their successful ascent.

The alpinists then set their sights on the expedition's main objective, the 800m high granite pillar called Stiffler's Mum attempted in 2010 by a French expedition. After climbing the first 4 pitches further to the right of the line chosen by the Frenchmen, the trio were pinned down by good but freezing conditions and were forced to abandon the attempt. The weather remained stable but cold and they quickly switched objectives to climb the striking needle located between Stiffler's Mum and Melcyr Shan. The first six pitches had been climbed in 2012 by the German Youth expedition and Gietl, Tavernini and Messini climbed past thin, steep ice and then perfect granite to reach the 5860 m summit, which they have named Tirol Shan.

Simon Gietl told planetmountain "I'd never been to China before and was extremely curious to discover for myself, especially after all I'd heard from the German team. And I wasn't disappointed. The logistics are fairly straightforward, the mountains stunning, the climbing is great and the potential is absolutely enormous. II'll certainly return in the near future."