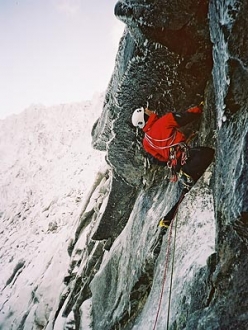 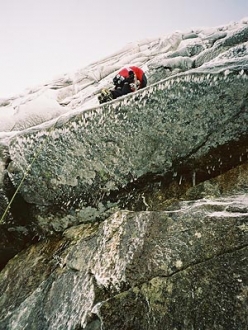 Alan Mullin running it out above the roof on Crazy Sorrow, Lochnagar
Photo by Mullin collection 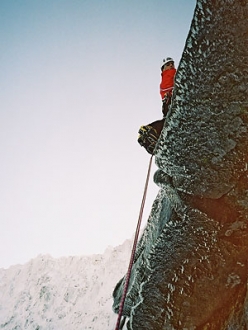 Editor's Note - 10/03/2007
Alan Mullin, one of Scotland's most accomplished winter climbers, passed away on 9 March 2007. The interview, dated January 2003, is testament to Alan's skill and hallmark ethical approach with which he took to the mountains.

Scotland is widely regarded as the birthplace of ice and mixed climbing. Since its outset in the early 1950’s winter climbing has evolved continuously, standards have risen dramatically, but one factor has always remained constant: all climbs are traditional. Ethics dictate that these climbs are protected with trad gear only, and bolts are not only frowned upon but vehemently opposed. The ensuing routes command respect, not only because of their technical difficulties but, above all, because of the psychological challenge.

In November 2002 Alan Mullin, one of Britains top mixed climbers, made an audacious winter ascent of Crazy Sorrow, a summer E4 6a, located at Lochnagar. No bolts. No prior top roping. No abseil inspection. A ground-up ascent in appalling conditions, together with climbing partner Steve Lynch. Proposed grade, X 11. A contender for the hardest trad mixed route in the world.

Although setting new standards in terms of psychological difficulty, this climb went by largely unnoticed. We set out to find out more…

Alan, with your ascent of Crazy Sorrow you talk about a new era…
I say a new era as I feel we have been led away from true mixed climbing for far too long. There are few cutting edge routes out there that resemble anything traditional or bold, and many are simply rock climbs with bolts. From a pure physical and technical aspect these routes obviously far outweigh our own vertical plain, but the climber’s true mental ability is not put to the test.

Unlike on Crazy Sorrow
Crazy Sorrow is a poorly protected 35m trad E4 6a in summer. In winter it transforms into thin mixed climbing on a steep 80 degree slab with rubbish gear in flared grooves filled with thin ice. It is the most committing climb imaginable and a fall from the difficult crux would undoubtedly have resulted in a broken back.

You chose to check out the route prior to the winter ascent
Yes, I pre-inspected the route in summer, two months before my winter climb. This was quite important as it allowed me to deal with the psychological issue of knowing it would not be very well protected. But I didn’t top rope the route, nor was the protection pre placed and left in-situ. That’s simply not the point of trad mixed climbing. These routes rely on the climber’s ability to place gear in extremis and continue with the technical climbing, regardless of the conditions!

So what about conditions during the ascent
I attempted it in winter from the ground once, backed off, and on my second attempt climbed it, placing all the gear on lead. During my first attempt I placed a peg at about 15m – the only pro up to this point – but this was iced into the rock and unusable, so I had to climb on past the thin roof. A fall would have been horrendous.

A bolt would have changed it all
Yes, and the hardest moves were still to come.

M routes are currently witnessing an explosion worldwide. Is this the future?
Sheer brute strength seems to count for far more than the climbers true mental ability at the moment, and in some respects it is rapidly becoming no more than a circus act. I truly believe we have caught up with the very hardest M routes and it would be nice to think that climbers, sooner rather than later, look towards us for inspiration.

In just a couple of years Alan Mullin, 30, has repeated and established some of the hardest routes in Scotland. Always searching for his personal limits, Alan distinguishes himself for the rigid ethical approach and solo ascents in difficult conditions.