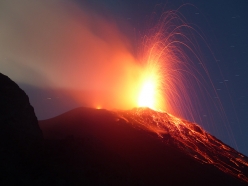 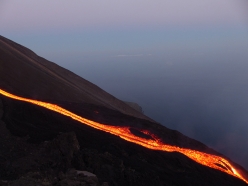 The trek to the Stromboli Volcano
Photo by Vincenzo Modica 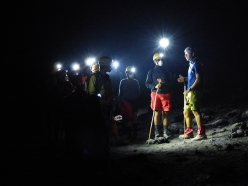 The trek to the Stromboli Volcano
Photo by Vincenzo Modica

PORTFOLIO / gallery Portfolio: Stromboli volcano and the spectacular hike in the Aeolian Islands

Stromboli volcano and the spectacular hike in the Aeolian Islands

Marco Milanese introduces the hike to the summit of the volcano on Stromboli, the charming island in the Aeolian Islands in Sicily, Italy.

Have you ever seen someone cast a handful of seeds as they sow a field? This gesture is as ancient as humankind, as hands worked the land for thousands of years. This gesture serves to disperse the seeds as far and as evenly as possible across in an arch. Well, the village of Stromboli in the Aeolian Islands in Sicily seems to have been built in exactly this manner along an arc of the coast, the only land available, at the foot of a volcano. On the other side of the island, a few kilometres away, lies the island’s only other village, Ginostra. Here the houses, instead being sown by strong hands, seem to have been sprinkled like a pinch of salt. Unreachable by land, the only way link between these two villages is by sea.

The island is a mere 12 km2 and the only means of transport, excluding boats, are scooters, ape and electric karts. Life here is harsh, there are no cultivated fields here and everything is black apart from the stark white houses. Even the locals are harsh at times, but there is strong sense of belonging and they always display their love and these ancient land.

Although Stromboli’s main income is tourism, the islanders aren’t always happy to be disturbed by the hordes of people that are ferried every day to this remote corner. Many of the tourists come here for the islands main attraction: the climb up the volcano. Going at a very slow pace, the walk takes about three hours and allows practically everyone to reach the summit. The pace is slow because tourists come in all shapes and sizes, and the oldest to have walked to the top is a 92-year-old! Having said that, the walk mustn’t be underestimated by any means! The 900 meters altitude gain, the wind, fog, sand you sink in and the volcanic gases render this hike a real adventure just a stone’s throw from the sea.

Even if those used to walking in the mountains might consider this an easy outing, you can only walk up the volcano accompanied by guides. Imagine 2, 3, 400 people wandering through the thick fog, without anyone telling them where to go, and with huge rocky bastions to the left and right. The biggest danger on this volcano is the mist that unexpectedly bellows from the craters, bringing visibility down to less than a meter.

The spectacle is utterly extraordinary and unique and what is even more surprising that the natural "fireworks" that erupt from the crater, is the roar that is emitted. Sometimes this is so strong it startles the tourists off their feet. These explosions usually occur every 10-15 minutes. The start of the hike is calculated so that people reach the top at sunset, and this immense natural spectacle is almost always a certain guarantee. The icing on the cake comes right at end: a splendid view onto the sea, seen from an altitude of 1000 meters. The view spins 360 degrees across Calabria, Salina, Etna as the moon reflects in the water, resembling a shining motorway across the sea. And when there is no moon, it’s so dark up there that the Milky Way appears in all its beauty.

Stromboli really is a unique island that enables those who visit it to comprehend how small mankind is and how powerful nature can be. It’s another one of those special places where one learns how to respect Mother Nature.

TOPO: Walk to the top of the volcano on Stromboli