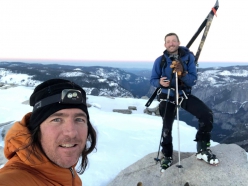 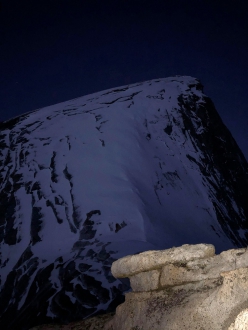 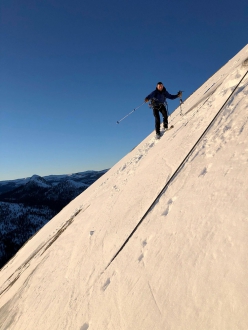 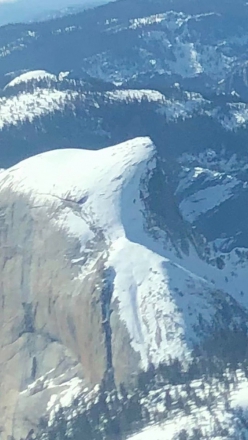 American alpinists Jason Torlano and Zach Milligan have skied down Half Dome. This is reputed to be the first integral descent from the summit all the way back down into Yosemite Valley.

The Cables Route is the standard route to the summit, used by thousands of hikers every summer, but when the two cables are taken down Half Dome becomes far less crowded and, in winter, the mountain sees hardly any ascents at all. The peak has been skied at least twice before in the past: way back in 1981 by Bob Bellman and Eric Perlman who belayed each other on some of the steeper sections on what is also known as the Death slabs, and, perhaps even more impressively, by Jim Zellers who in 2000 completed the first snowboard descent, on his own and without needing a rope. Unlike Torlano and Milligan, none of the previous descents continued all the way back down into Yosemite Valley.

Torlano had kept his eyes on the mountain this winter as various storms rolled in and after checking conditions by plane teamed up with Milligan. From Curry Village down in Yosemite the two skinned up the John Muir Trail to bivy at the base of Sub Dome, below the shoulder of Half Dome.

They set off in the dark early the next morning and, following the Cables Route, summited at first light. They spent less then 5 minutes on the top as they wanted to ski the face before the sun came out, then started down the extremely exposed line.

Disaster almost struck when Milligan’s skis caught one of the cables and he lost his balance, but fortunately he managed to stop his fall with the ice pick on his ski pole, right himself using the cable, and continue on down unscathed. After the most exposed Cables section, the duo continued down the Death Slabs, past some short abseils and via the climbing approach to Half Dome before returning to Mirror Lake and the valley floor.

After the descent 45-year-old Torlano, who had never climbed Half Dome before in winter, told planetmountain.com "I felt blessed to live this life up in the mountains. I have looked up at Half Dome since a kid from my schooI, it was a good feeling finally finishing a childhood dream."

22.04.2016
Half Dome 1977 and the pioneering flight in Yosemite
The short film by Carl Boenish that documents the flight carried out by Rich Piccirilli, Jim Hanbury and Brian Johnson from Half Dome (Yosemite) that marked a pivotal moment in the history of BASE jumping.