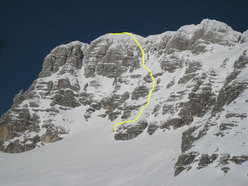 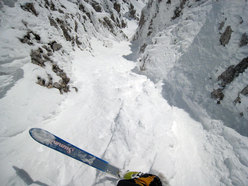 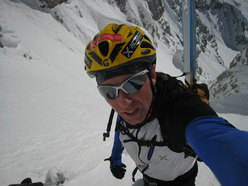 Luca Vuerich has carried out the first ski descent of the South Face of Jof di Montasio 2753m (Julian Alps).

Three hours and 45 minutes to ascend from Sella Nevea to the 2753m high summit of Jof di Montasio, the second highest mountain in the Julian Alps. But above all, 40 minutes to descend from the summit down the south face, along a white magic line which this generous winter has created. It's an absolute first. But it's also a descent which Luca Vuerich (Mountain Guide, Himalayan mountaineering and ice climber) had been dreaming about for a long time. The slope angle averages 45°, with some sections steeping to 55°. As Luca himself recounts, he resolved the problem with "one deep breath and then off I went!"

This year the abundant snowfall has blanketed almost all gullies and faces in the Julian Alps, including the Jof Fuart which is the highest peak in the Italian Julian Alps. The area to the south of the Montasio plateau is a paradise for ski mountaineering, and it comes as no surprise that I come here with my clients to ski. The orientation south, the slope angles suited for all abilities and the regular safe conditions make it a highly popular choice.

I'd often reached the summit in winter but I'd never managed to descend right from the top because of the obligatory section down the Pipan ladder on the normal route. The only solution directly from the summit had been found by Mauro Rumez who had skied down the West Face via the Findenegg gully. But no one had ever skied down the main South Face, and for years this had been one of my winter dreams.

I departed from Sella Nivea with the idea of making a reconnaissance to check out the line, so I only took ski mountaineering gear, ice axe and crampons. I left a rope and other gear behind on purpose to be faster. When I reached the base of the wall I was feeling relaxed. I put on my crampons, strapped my skies to my rucksack and started directly up the first rock section via a series gullies and the open face. As I climbed I carefully studied a route through this lower section which is very steep and hard to find.

I reached the gully I had chosen from below at circa 2400m, the snow was good, it hadn't transformed yet and I I had a tough time to beat a track on my own, but I was curious to find out if it could be climbed. It narrowed towards the end and became very steep but I caught sight of the summit and knew that I'd be able to ski down it. I reached the ridge and then the summit cross. Feeling a a bit tense about the descent I prepared myself, quickly took a couple of photos of the spectacular panorama and then the time had come.

My fear disappeared as soon as I stepped into my bindings. I learnt how to ski before learning how to walk and I felt fine, but psychologically the first turn is always the hardest. In this case it's also the most complicated because it leads down to the gully and the descent. The only thing to do is sum up some courage and jump down from the cornice...

One deep breath and off I went... I jumped a few turns on in the beginning, then slid down for circa 10m through the narrowest section, managing only just to squeeze through before the gully opened up again. I then made a couple of nice turns thanks to the fact that I new the snow conditions perfectly. The face now widened I had to remain concentrated to remember the way down through the lower section. After not even 20 minutes I skied the last turns down to the base of Montasio.

From here the slope was easy and I let the skis slide, remembering those splendid moments, the wind in my face and the sun which warms me. I open my arms wide and I almost feel as if I can fly as I relive those moments alone on the South Face of Montasio.

Ascent via the normal route:
From Sella Nevea continue NW along the road which leads to the Montasio plateau 1 hour, then continue along the summer path towards Forca Disteis and ascend from left to right towards Forca Verde 2:30. Climb up the Pipan ladder to reach the crest and follow this to the summit, 1 hour.