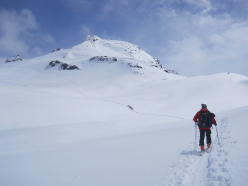 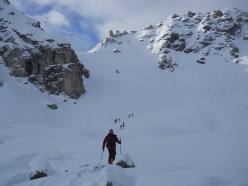 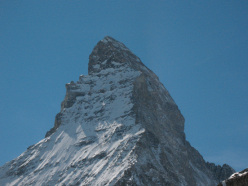 I recently read about the new speed record established by the extraordinary French athletes along the Chamonix Zermatt ski tour and I stopped for a moment to think: they'd just done the entire Haute Route in a mere 18 hours and so and so many minutes! Damn, the very first thing that sprung to mind was the next time I get asked about the Queen of the Alps record, I'll have to impress my clients as they incredulously sip a well-deserved glass of beer sitting outside the Plafleuri' hut with the new, incredibile time. 18 hours, thirty-five minutes: this is the new record set on Monday, April 15 by Lionel Claudepierre.

Claudepierre is a policeman belonging to the Peloton de gendarmerie de Haute Montagne as well as a mountain guide. He departed from the church at Chamonix to reach the church in Zermatt with a team of 3 other athletes, but one by one they gave up along the route leaving Lionel the joy of setting the new record. He set off at night, while the thousands who try the Queen of the Alps every season start in the morning at the Grand Montet cable car, attempting to catch the first "bin" if they want the reach the Trient hut on day 1. Or they take it more leisurely and spend the first night at Refuge d'Argentière. Five, better still six days of regal ski mountaineering trace a line which crosses different 1:25000 maps from Chamonix all the way to Zermatt.

The name itself, Haute Route, is enough and all ski mountaineers immediately think of her, the queen of all traverses. This isn't the right moment to discuss whether it's the most beautiful, the Alps have plenty of multi-day Haute Route tours, round trips and traverses through important mountain chains, and yet she is the undisputed queen. She studies all others a little aristocratically from head to foot, knowing full well that queens are not necessarily the most beautiful, all they need to do is simply shine the most to be the most important.

Its reputation is impressive to say the least and can be comprehended fully when booking the huts for a Sunday or Monday start just like everyone else. And if you're not booking long in advance (read months) it's more than likely that a gentle voice with a Swiss-French accent will answer "Désolée, complet".

Normally at the start of each week from late winter to early spring a large caravan of people set off on the Chamonix to Zermatt tour. In truth not all choose the same route, there are in fact many different variations, but the most classic route which ascends to Rosablanche, traverses Lac de Dix and climbs to Pigne d'Arolla tends to become very crowded indeed. And while during the ascent to Col du Poisson, or Col du Chardonnet depending on conditions, it's likely that the groups hardly look at each other, or even get annoyed about the slow pace, you can bet that at Cabanne des Vignettes they'll all know each others names and celebrate their birthdays together.

A word of warning though: don't be fooled by the large number of people on the ski tour at the same time, by the ever-present tracks, by perfectly blue skies or even by the flags which mark the route when, every two years, the Patruille des Glacier competition takes place from Zermatt to Verbier.

The Chamonix Zermatt is a difficult ski mountaineering traverse. To do it, you need to master all aspects of ski touring, because it's likely that during the week the queen will put you to the test and demand all your expertise and experience. As you duck under the ropes at the side of the piste on Gran Montets, a mere 100m from the start, you enter the glacier environment, and this starter provides a great foretaste to what lies in store. Col de Chardonnet is often descended via abseil. The Col des Ecandies slopes, the Lac de Dix and Pas du Chat traverse and Pigne d' Arolla are no joke and after an abundant snowfall that surprises you after a night in the hut you'll need excellent ability to assess the snow conditions. Some mountaineers are superbly lucky, but usually five or six days of perfect weather and ideal conditions are a rare occurrence. Often you reach the huts in total white-out conditions with a GPS and, as everyone knows, ambling about on a glacier in poor weather isn't the best of fun!

But when you reach the summit of Tete de Valpelline and Zermatt is no longer that far off, you finally really begin to understand the appeal of this traverse. After passing below the West Face of Dent D'Herin and skiing past the most hidden aspect (north and west) of Cervinia, oops, Matterhorn you reach the Furi station, snow conditions depending. It's chaos here with all the Zermatt skiers, but nevertheless you won't be able to resist some typical Rösti and a massive beer (unless you're T-total) in one of the restaurants close to the cable car. I've seen tired faces, happy faces, faces sunburned but never, ever, faces disappointed by the charm of this Haute Route!

A few hours later, sitting in a taxi or train which takes you back to Chamonix, through the hot Rhone valley and in the opposite direction, you think back to how much distance you covered on skis. In my opinion this is the real spirit of moving on skis, they are fun and, at the same time, a real means of transport, as they were for those pioneers who invented this challenge more than a century ago.

A thought obviously goes to the extraordinary athletes who completed this tour in just 18 hours and 35 minutes... chapeau!