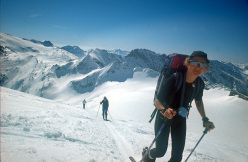 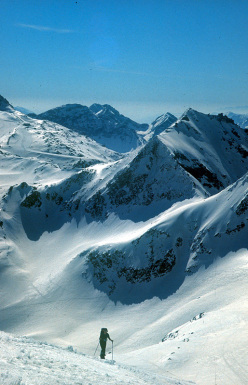 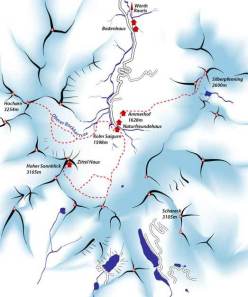 We seem to spending more time driving than skiing, or at least, that's how the last couple of winters have felt. In our continuing search to find the ever rarer (and expensive) snow we travel hundreds of miles in our beloved and hated car, an indispensable means to our end.

This time we head off to nearby Austria in the hope that at least there winters are different than in Italy. And so the countryside changes as we travel further north and the sensation the spring is at the door transforms, induced by a season which we had believed to be well over.

And finally at the border, once again: snow, snow, just look at the snow!

How much snow have they got here? Shouted out loud, we hope no one hears this spontaneous question. Anyway, they all seem to engrossed in finding possible (and improbable) descent lines on the fantastic slopes on the other side of our car window.

An impatient hour later we reach our goal, a town called Spittal in the heart of the Goldberggruppe. This mountain range, just like the neighbouring Glocknergruppe, forms part of the Hoher Tauern National Park, one of the most beautiful areas in Austria and world-famous for its ski mountaineering.

Given their altitude, the mountains here remain snow covered until relatively late in the season. Thereby capturing the imagination of Austrian and foreign skiers alike.

Access
The Goldberggruppe is situated in the Austrian Alps, not far from Spittal. Take the A10 Spittal- Innsbruck motorway and exit for St. Johann and Taxenbach. Continue from here towards Rauris, pass Wörth and on to the end of the road at Kolm Saigurn, from where the itinerary is based. It is obligatory to buy a pass to use the Austrian motorways; this can be bought at any petrol station and must be stuck to the window pane. The skiing area is reached via a toll-road to Kolm Saigurn. The final section to the Naturfreundehaus is reached on foot (20 mins) since the road is closed to traffic.

Food and accommodation
The Naturfreunde Hütte is highly recommended. It is more akin to a hotel than a refuge, well run and inexpensive.