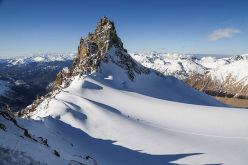 The film Apogée in memory of the skiers Andreas Fransson and JP Auclair who were killed just over a year ago, on 29 September 2014, by an avalanche on Monte San Lorenzo in Patagonia.

On September 29th 2014 the skiing world reeled in shock and disbelief at the news that two of its finest skiers and alpinists, JP Auclair and Andreas Fransson, had died in an avalanche on Monte San Lorenzo near the border of Chile and Argentina. The two were in Patagonia together with Daniel Rönnbäck and Bjarne Salén, travelling to magnificent destinations and creating beautiful, touching ski movies to inspire others around the world. A year has passed since that terrible accident and Salén has now produced this film in memory of the amazing adventures they had together.