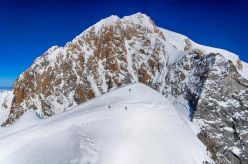 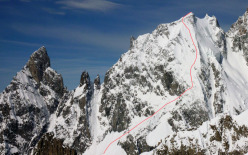 On 23/04/2013 Francesco Civra Dano and Luca Rolli (skis), Julien Herry and Davide Capozzi (snowboard) made the first repeat of the East Face of Aiguille Blanche de Peuterey in the Mont Blanc massif. The famous "face that doesn't exist", first skied on 18 June 1984 by Stefano de Benedetti. Capozzi provides the details.

A dream come true. I've been extreme skiing for more than a decade now, my experience in the mountains beforehand was practically zero but slowly but surely I tried to learn, with the aim of fulfilling my dreams one day. The East Face of Aiguille Blanche, la Blanche, has become known as "la parete che non c'é", the face that doesn't exist, a sort of Never Never Land and for those who, like me, live in Courmayeur, this is the descent which we look at every day. It's inevitable therefore that it eventually transforms into the biggest dream of all.

Back in June 1984 Italian extreme skier Stefano De Benedetti first skied this face, after this feat though no one followed his tracks. In 2007 Francesco and Roch Malnuit gave it a shot and managed to ski just over half the face. During the last few years we've often checked her conditions, courted her, we tried and failed.

I think the real value of our descent goes well beyond the objective difficulties or the angle of the slope: ours will always remain a descent carried out 29 years after Stefano De Benedetti's masterpiece. All these years passed and I think the main reason aren't the difficulties which, in turn, are linked to the right conditions or the approach across the tormented Brenva glacier. No, I believe it's this massive void which ever since June 1984 has played a deciding factor in all those who wanted to try this face.

I like the idea that certain descents have a greater historical value than others. From a technical point of view almost everything has already been done, in the Mont Blanc massif difficult descents are repeated regularly and at Chamonix there is the highest  concentration of cutting-edge alpinists and skiers. Nevertheless it's nice to know that some descents, even here, remain untouched for years and the dreams of many. As of today it's time to turn the page, others will tackle the East Face, but this will be another story.

Thanks to Francesco, perhaps he who dreamt most about this descent, to Luca for being a perfect partner on so many descents, and to Julien who shared this dream with us and proved once again to be not only a truly special person but also a great alpinist.