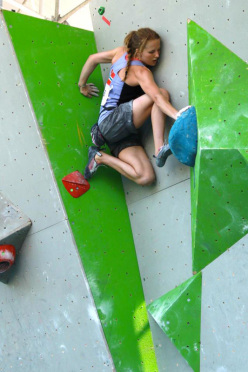 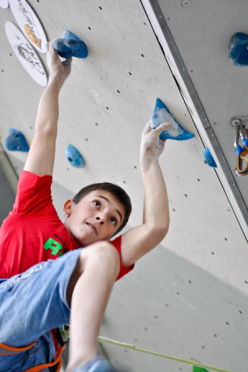 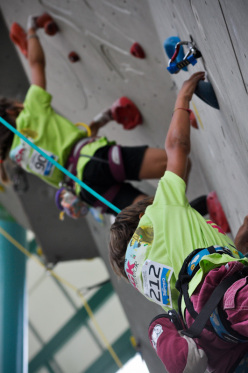 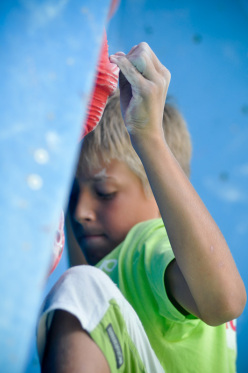 An analysis of the youth climbing competition scene and interview with European Lead Tina Johnsen Hafsaas. An article by Franz Schiassi.

The fact that climbing is a sport in which very young athletes can be extremely competitive and perform at the highest level has been clear since the ‘90s, when a young Chris Sharma took only 3 years to go from his first 6a gym climb to the 8c+ of Necessary Evil, at the time the hardest sport route in the USA. Aged 15, he was already one of the best sport climbers in North America.

It wasn't long before similar things started to happen in competitions too, despite the fact that more factors come into play and one would think that experience plays a fundamental role. In fact, teenage athletes (competing as seniors) started not only to win one-off events such as World and European Championships or the Rock Master, but to prove their superiority during a full season. Youngsters such as Adam Ondra and Johanna Ernst managed to win the Lead World Cup in their respective debuts in the senior circuit at an incredible age of 16. It goes without saying therefore that a lot of talent lies in these athletes competing in three categories, Youth B (14 and 15 years old), Youth A (16 and 17) and Junior (18 and 19). Let's have a look at what 2012 meant for these youngsters!

The European Youth Cup Lead (junior male) was won convincingly by Slovenian Domen Skofic, who also won the European Championship and placed second at the World Championship in Singapore. Loïc Timmermans of Belgium won both European events for Youth A, but underperformed at the Singaporean event, which was won by German Sebastian Halenke (third at the European Youth Championship). The youngest category saw a number of promising athletes figuring quite consistently on the podiums: Ruben Firnenburg (GER), Anze Peharc (SLO) and Georg Parma (AUT) are the three most prominent performers.
For the same age category but representing female athletes, Hannah Schubert (younger sister of reigning Lead World Champion Jakob Schubert) won both Championship events and placed second in the Euro Youth Cup, behind Serbian Stasa Gejo. In a similar manner, it was also a young Austrian, Jessica Pilz, who won both Championships for female Youth A and placed second in the EYC behind Anak Verhoeven of Belgium (no ties with Dutchman Jorg Verhoeven!).

Last but not least the junior female category saw Momoka Oda, now at her third year in the senior WC, dominating the World Championship ahead of Austrians Magdalena Röck and Katharina Posch. Röck also won the European Championship ahead of Hélène Janicot of France (who won a Senior World Cup event this year, just like Momoka Oda) whereas the consistent season of Tina Johnsen Hafsaas of Norway was crowned with a convincing victory in the European Youth Cup, with three first places over six events.

As many of the other female junior athletes are now competing mostly as seniors, we decided to get in touch with Tina to get a feeling of this world of youngsters…

Tina, what can you tell us about yourself and your climbing? What do you like about competitions?
I started climbing at the age of 12 and I got more and more serious over the years. Now it means everything to me. I am most fascinated by training and competitions and I love the fact that you can always get better and stronger. Doing a perfect competition is impossible, because there is always something you could have done differently and better, and this is something that pushes me forward and upwards.

In the 2011 European Youth Cup you were sixth in your second year as a Youth A, but this year you won despite being in the first year in the Junior category. What made the difference?
Yes, I placed 6th in the overall ranking last year, but I got injured in September and missed the last two competitions in the Cup. I was actually well placed to finish 2nd, but because of the injury I was forced to rest for several months. When I could finally start climbing again I had to take it easy, and I spent more or less the whole winter and spring on general training instead of working on my climbing weaknesses, getting stronger etc.

Can you tell us something about your training and the development of your climbing style and strengths? Did any of them change during this season?
In the last months I spent a lot of time building my general level up because I lost quite a lot during my injury, though it didn't take too much time getting it back. But time is valuable, and it was 6 months I could have spent on getting better instead of getting back. I more or less started from scratch at the beginning of 2012, so I felt a big progress throughout the year and my style changed a lot as well. I went from being quite static to more dynamic, which I like. Now that things are good I will work on all my weaknesses and train harder than ever before!

Is there anything that you have learned or experienced at senior level that you'll take back to the Youth competitions?
The World Cup events I did this year were pure fun; I didn't train or prepare 100% for them. That made it quite hard to perform and give what I had, which is also the reason why I performed well in youth competitions and quite bad as a senior. The most important thing I learned this year was that if I want to perform and be able to give 100%, I need a good preparation and to take it seriously all the way. I have to train, prepare and do everything I can to do well in a competition. And when I do, I feel the pressure and this makes me give everything I have to the challenge.

In the past we have seen some extremely young athletes leaving the Youth circuit early to go on and win the Senior World Cup or World Championship in their debut year, but many more who took their time to get to great results, such as Mina Markovic, Jakob Schubert and Jain Kim. What do you think allowed these athletes to mature over time and to turn defeats into victories?
All three of them are great climbers and amazing athletes. One of the things that make them so great is how consistent they have been. They always perform well and give everything, and maybe that is helped by many years of experience in youth competitions to start with. I guess some climbers are ready for the World Cup at 16, while some need more time. In the end everyone ends up in the senior category and the youth competitions ends up being a practice arena.

The IFSC has announced that bouldering will also be part of the Youth World Championships from 2015, possibly following the example of the European Youth Cup and of the PanAmerican Championships. What do you think of this decision? Do you do boulder competitions too?
I think that including bouldering in the World Youth Championships is a step in the right direction. A lot of people are worried about bouldering at a young age because of injuries, but I don't know enough to have an opinion about it. But as a climber I can say that bouldering is fun and probably the best way to train for lead climbing. I dislocated my elbow on a boulder competition last year, so I find them quite scary. But I did a few this year, and I will probably do some more next year because you get to climb and learn a lot. And they are fun as well!

I just wanted to ask you what are your plans for the 2013 competition season…
I am very excited for 2013, especially because now I can work and train hard to be a better climber. I will focus a bit more on the World Cup and on the Youth Championships, but will still do the EYC because it's fun and I learn a lot. I am also very excited for the first international competition ever organised in Norway in September, which is an EYC event.

Finally, I know something unusual happened in the last EYC stage, in Kranj. Could you tell us what it was?
Yes, I ended up winning the last event, but not the way I wanted. The Slovenian girl Tina Sustersic was superior throughout the competition, but unfortunately stepped on a bolt half way up the final route. She was initially announced as the winner, but because she had broken a rule, an appeal was sent in and it got through. So I ended up being the official winner, but it felt wrong to stand on the podium with the gold medal around my neck, so I gave it to Tina because I know how much it meant to her. Moreover, I think a gold medal should represent how well you performed on that competition and a proof of you being the best, but my gold medal did not represent that, and it felt natural to give it to Tina who deserved it. But in the end we both ended up with a gold medal because the organisers found it touching that I'd given mine away, and since they had one spare, I got a new one.