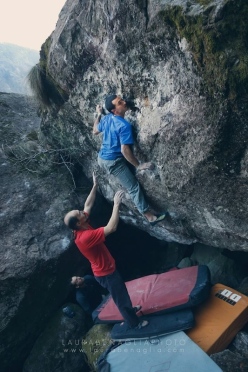 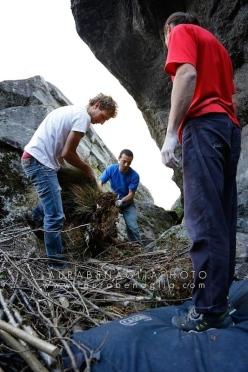 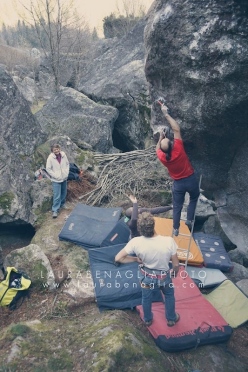 PORTFOLIO / gallery Portfolio: Simone Pedeferri - behind the scenes of Melloblocco 2014

Interview with Simone Pedeferri, the man who leads the group of route setters who unearth and prepare the new problems and areas for the Melloblocco bouldering event in Val di Mello - Val Masino, Italy.

Melloblocco 2014 kicks off in less than a month and preparations for the world's biggest bouldering meeting are obviously in full swing. As every year there are plenty of new things to report about, first and foremost though there are real stars of the valley: the new boulder problems and areas discovered and developed by the tireless team of route setters, currently hard at work preparing everything in time for the start of May. The route setters are climbers, gardeners, builders, experts at rope access that require both big muscles and the delicate touch of an artist... In short, they're a bit of everything. As explained here by Simone Pedeferri, the mind behind the highly experienced, unique team of route setters who work behind the scenes to present Val di Mello and Val Masino in all its glory.

Simone, let's start with the Backstage, what exactly is it?
Yes, the Backstage is a great new addition this year. We publish photos on our Facebook Backstage page almost every day showing what we're doing, how things are progressing and I reckon it's a great way to share Melloblocco with everyone even before the actual Melloblocco event.

We've seen photos of beautiful boulders, big new areas...
Let's just say that we're simply continuing what we began years ago, trying to bring to light all the problems in the valley. We're basically doing two things: preparing the problems for the competition and creating new areas that join those we cleaned in the past.

Tell us about your team
Typically I work with Mirko Masè, Giovanni Ongaro and Davide Spini, three mountain guides, and the two Ragni di Lecco climbers Luca Schiera and Andrea Pavan. Six of us, two teams that rotate and work full-time, along with ERSAF, the regional body in charge of the forests here.

So what's in store for Melloblocco 2014?
There's one big new area with about 70 problems and another, smaller but really beautiful area. The first is comprised of coarse-grained, rough granite, typical of Val Masino, while the other has a finer-grained serizzo gneiss that is far more delicate. A pleasant contrast.

What's surprising is that after 11 years you still manage to find such big new areas!
It doesn't surprise me. I explore the valley all year round and during my walks I often stumble across new places, so I know how much potential this valley still holds. And of course you also need to know how to look.

Explain
Well, so far I've brushed and put up approximately 2,000 new problems worldwide. I've cleaned more than 100 lines each year just for Melloblocco, this is the 11th year, things quickly add up. Over the years the experience I've gained now enables me see things that perhaps I failed to see in the past and with new techniques we can now develop areas we previously believed were unsuitable.

Melloblocco is compelling because, apart from the beauty of the valley, it offers a tantalizing mix of a mellow meeting and a fierce fight.
Yes, it's true. It's amazing to watch the strongest climbers battle it out in the competition, see them up close. But for me in some respects the comp is only secondary. What really motivates me, what's important, is the exchange of ideas that takes place between all the climbers. And what's also important are the problems we create. For me they need to have something particular, they all need to be of a certain quality.

Tell us quickly about the competition problems
Ten for the men and just as many for the women. From 7A to 7C+ for the women, for the men from 7B+ to 8... who knows? Hard to say. What's important though is, as I said, that they're real quality problems, and this year they're as good as those of the last 4 editions I'd say.

We can't help but ask: by chance, are you fussy?
Very! Who told you? Yes, I'm really meticulous, I want everything to be absolutely perfect. That's why I choose the climbing areas very carefully indeed.

Like an artist?
We do ropework, we're gardeners, climbers, a bit of everything really. But yes, I like the idea that what I do is similar to that of a painter. Who sketches, paints a picture, lots of paintings actually. After that the pictures are hung up in the art galley and this stage, how they're laid out is important, too. This concept is identical to what we do, only that instead of a painting we have a boulder problem. And after the problem has been climbed, it has to be presented properly: cleaned in a certain manner, dangerous branches need chopping in a particular way, the alpine meadows are trimmed and raked, the landings are made safe according to certain criteria. When Melloblocco finally happens it's like a vernissage, the formal opening, the work is done and I can finally relax and watch everyone else.

These are two intense months?
Yes, and I'm knackered, no joke! We started in early March and we work all day, every day. My hands are trashed. We've just finished making the landings safe, four of us, all day beneath one boulder.

What's the most important thing in all this?
I may seem boring and repetitive, but we devote lots of attention to the landings. We try to make them as safe as possible, remove the boulders that jut out, the branches that stick out... More than 2,000 climbers come to every meeting and, so far, no one has ever been seriously injured. Over the years this almost obsessive attention to detail has proven to be successful.

What are you proud of?
When I finish off a nice new boulder, like yesterday. When it' ready, perhaps marked with chalk on just the right holds and lies there, calmly, as if it were a beautiful painting. You know all about it, its history, how it became what it is. A gift of nature.

These gifts are all marked on your usual "treasure map"?
Yes, everything will be painted on the map. If there's an arrow and a grade, it means that the problem has been freed. As always, "S" stands for "sit start", "G" for "kneel start", "I" for stand-start. No grade means it's still a project. There can be many reasons why a problem hasn't been freed yet: either it's too hard, not cleaned properly, or we simply ran out of time. You know, often freeing the problems is rather tricky since we finish in the dark and so we try to free them with our head torches. After having worked for 9 hours on the trot.

Oh by the way: are they all natural?
Certainly. Otherwise I wouldn't have such a hard time finding the areas and I wouldn't waste so many days searching for the ideal lines.

What do you expect from the next edition?
The sun! Honestly, after such a long winter it would be nice to enjoy the warmth of spring. But getting back to what I said earlier: I'm really keen to see what people think about the two new areas. The second one, the little one, is reached by a 15 minute walk along a beautiful path that leads to three stunning boulders and two Crotti, the typical houses made right into the rock by shepherds for their cheese. The date they were built is carved onto the wooden door, over 200 years ago. It's crazy if you think about it, absolutely unique, and adds a touch of real quality to Melloblocco.

So where is it?
Hey no, come on, I can't tell you yet! That's a secret. But when you come we'll discover it together!