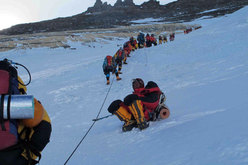 Interview with Simone Moro who descended to Everst Base Camp today and abandoned his project of climbing Everest and then Lhotse without supplementary oxygen due to the massive crowds on the mountain (more than 200 are currently attempting to reach its summit) and the dangers association with this overcrowding.

"Unbelievable, it really was like being in an amusement park..." These are the first words Simone Moro uses at Everest Base Camp. The amusement park he's referring to is the highest mountain in the world and this morning Moro found himself caught up in an unimaginable crowd, more than 200 climbers who were slowly ascending up to the South Col. Moro had no doubt: he abandoned the madding crowd and in doing so he also abandoned his project to climb, one after the other, Everest and Lhotse without supplementary oxygen. Everything was going too slowly. Too many were too unprepared. It would have been absurd to be “commanded” by and entagled in the rhythm of this enormous line of climbers. In short, too risky. Those who climb in the Himalaya, and read the news, know this full-well. But evidently nothing has been learnt from the many lessons in the past which include, above all, the tragedies on Everest in 1998 and the more recent turn of events on K2 in 2008. To no use those 4 who recently died on Everest, making headline news. This overcrowding and lack of preparation in the Himalaya is an age-old discussion. The usual one about commercial expeditions some may say. But it needs addressing. By stating, first and foremost, that not all commercial expeditions are equal and that some, like Russel Brice, decided to abandon the expedition because he felt conditions were simply too dangerous for his clients. And then by trying to talk about this issue as much as possible, in an attempt to return to that way of taking to the mountains which seems to have been lost altogether (at least here on Everest). It's also because of this that we're sharing this long chat (rigourously via Skype) with Simone Moro.

Simone, tell us about the situation on Everest.
I climbed fairly early yesterday so there wasn't a big queue. But this morning when I set off I was shocked. I looked up and could see nothing but people for hundreds of metres. And then I looked down... ditto. First I climbed at the same speed as the group, then I tried to overtake some, using only my crampons, but I got out of breath, I lost the rhythm (obviously, since I wasn't using supplementary oxygen). I then got back in line and people looked at me disapprovingly... in short, I felt like I was in the wrong place at the wrong time. I counted more than 200 people above and below me ascending up to the South Col. Unbelievable, it really was like being in an amusement park...

But didn't you know it would be like that? Didn't you imagine all this beforehand?
Yes... but not that everyone would make their summit bid on the same day. In past seasons the summit climbs were spread out over various days. This year - after Russel Brice (one of the most expert organisers of "commercial expeditions") pulled out due to the dangerous state of the icefall and the Lhotse face - the remaining expeditions asked themselves what they should do and they all decided to ascend right now.

For you this is an Everest which, in these conditions, is unclimbable... can you quickly explain why?
Well, I think that any alpinist can understand immediately why. When you try to climb without oxygen you have to go at your own speed, constant, and descend quickly. Having all those people in front of you means that the speed, the rests and the waiting is dictated by the queue and you can't do anything about it. Ditto during the descent. On 19 May people died who were using 9 bottles of oxygen each!!! And in the end they consumed all the oxygen because of the slow progress and they died. So what should I have done? Jump in with that Russian roulette? Nooo. I'd have to use oxygen and adapt to the comings and goings etc. etc. but that certainly isn't what I aim to do.

The situation you described is unbelievable... but do all there people (talking of which, why don't you talk of them as alpinists) realise what's going on? And if they realise, what is the root of the problem? What mistake is being made?
Let's just say that they move according to dynamics and "safety" dictated by the group. Perhaps I was mistaken in not calling them alpinists. Probably they are or they think they are, but I'm astonished every time I see people who don't know how use a jumar, how to open and move it. I'm amazed when I see people who need help in putting on crampons, who are given a hand by Sherpa to walk along a ledge to have a crap. In short, none of these things are new here on Everest, these are the people who pay, who provide a living for the Sherpa, agencies, lodges and helicopters. But today, when I was right in the midst of it all and found myself thinking about tomorrow, I got scared and this made me make the decision to leave the group once and for all.

All of this is true... a situation which we know about and which has been around for years. But it's almost as if one needs to discuss things once again, on a cultural level as well, about that alpinism, about that way of climbing mountains, those mountains in particular, Everest...
Yes, but you risk talking and deciding about a mountain which isn't ours but belongs to Nepal. It would suffice were commercial expeditions to use different criteria when selecting clients, and that they carry out mandatory pre-Everest climbs. Nepal lives off Everest and tourism, so exposing yourself by suggesting drastic decisions is always rather delicate.

I'm not talking about drastic decisions, but about being aware of the limits and dangers associated with this form of "development". Talking of which, do you think the crowd you were in was aware of the risks involved?
Very few. When I decided to stop and descend they all greeted me and shook my hand (I'm well known here) and when I told them I was giving up because of the dangerous overcrowding they answered: you are right... and continued to climb upwards...

Tell me the truth... this is something you've been thinking about for days... what's the sense in all this? What ideas do you have about their motivation, what drives them, what would you like to say to these people who perhaps unwittingly put their own lives at risk?
Everest for all these people is a jewel which they want to purchase and conquest. For them it's an emblem, a joining an exclusive club of the "brave". I can partially understand them, from being nobody they suddenly become someone at home or in their own country. I see them squeezing out every last ounce of energy and die for this mountain. All of this makes no sense to me but must make lots of sense to them.

But can something be done to invert this tendency? Is it likely that the destiny of Everest and other great mountains, the symbols of this earth, are reduced to overcrowding? To this form of “consumerism” applied to alpinism, this quest for a trophy as an end which justifies the means?
This only happens on Everest. In some respects on Manaslu and Cho Oyu, but a lot less. Perhaps only G2 in Pakistan . The decision I took wants to be a clear message from someone who, probably more than many of those standing in line, could have climbed Everest.... I hope people reflect about this decision, perhaps not the protagonists themselves but those who organise the commercial expeditions.

You come across as being serene, but this twin ascent Everest - Lhotse meant a lot to you... are you perhaps trying to control the bitterness or disappointment?
I'm neither bitter nor disappointed. Alpinism has given me plenty of peace and I know that I'm no longer dependant on a climb or an interview. I'm solid, mature enough and this helps me a lot and I'm also lucky enough to have sponsors who don't judge me by what I climb or don't climb. I know that the climb has only been postponed to a later date, it's like a fruit that needs a bit more sun to ripen properly. I've got plenty of other things to do at home, ideas and projects for which it's worth serenely giving up on this one. Perhaps abandoning here today can teach me something, and also those here and at home. Dying for a dream isn't included in my way of interpreting life.