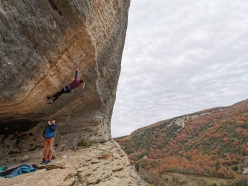 Eline Le Menestrel climbing Chouca 8a+ at Buoux in France. This legendary 8a+ was first ascended in 1985 by her father Marc le Menestrel
Photo by Eduard Bosch 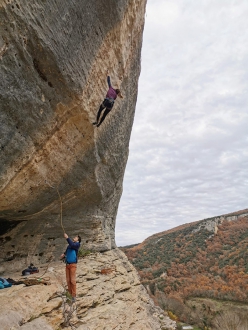 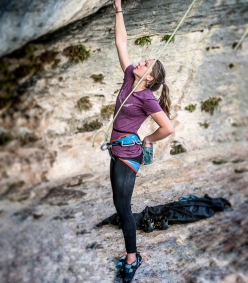 Eline Le Menestrel at the start of Chouca 8a+ at Buoux. 'Chouca kicks in straight away. I have to stand on tiptoes to grab a two-finger pocket and lock off to the next hold. It’s almost like doing a one-arm pull up'
Photo by Ricardo Giancola 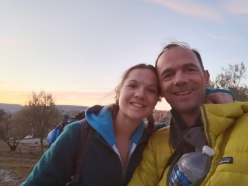 Chouca at Buoux is one of those routes that has marked the history of sport climbing. First ascended in 1985 by Marc Le Menestrel, it was recently repeated by his daughter Eline Le Menestrel.  This was an excellent pretext to find out more about this legendary climb and why the crag Buoux continues to be in step with the times.

A few days ago French climber Eline Le Menestrel repeated Chouca, the legendary 8a+ at Buoux first ascended back in 1985 by her father Marc le Menestrel when, at the age of just 18, he was one of the undisputed enfant prodige of sport climbing. It was on these fierce pockets at the sector Le Bout du Monde that in 1988 Catherine Destivelle made the world’s first female ascent of an 8a+ and even today the line is considered a coveted testpiece. Here’s what Eline and Marc had to say.

Marc, can you tell us a bit about Chouca. How did it come about?
The truth is that I was immediately impressed by this route. Chouca was a line that somehow avoided the center line which looked impossible to me and which would later become La Rose et Le Vampire. So all I did was try to find the easiest way through the overhang! There's a dyno and this was incredible because, at that time, there was no foot hold, this appeared later as a result of many people trying it. However, for me the hardest move was below. I hadn’t found the undercling and fell a number of times down there. I only fell once or twice at the dyno. I remember I was trying the route early in the morning because it was August. What is remarkable is that has attracted so much attention over the years, but this is because it is such a great route to climb!

The route is also renowned for the figure of four move, immortalised in the famous photo of Tony Yaniro repeating the route in the late '80's . Did you yourself use it?
The figure four was invented by Darius Azin and I found it amazing, of course. I was mesmerised! But no, I myself did not use it since the dyno was so cool. And nowadays it’s actually not much easier that way because the hold broke and it can’t be held in the way you need to in order to do the figure 4.

Three years after your first ascent Catherine Destivelle completed the first female ascent of an 8a+, on precisely this route!
I remember this very well. Catherine was an extremely talented climber, with an excellent attitude towards performance. I remember at that time a discussion we had about doing routes to become famous or becoming famous because we do routes. She was so charismatic that she had a lot of pressure to do what sponsors wanted. But above all, she loved climbing with us and trying the hardest routes possible.

Did you ever think that one day history would repeat itself and that your daughter would climb it?
To me, the most wonderful gift is to be able to climb with Eline just like I climbed with my father. During these last months Eline and I have become very close, exchanging a lot thoughts about the art of climbing and her desire to do Chouca. On  greater level though, this connection is about the art of life and this father-daughter relationship is a blessing. And it connects me with my own father. It is precious to nurture family relations.

Definitely! So Eline, can you tell us why this route is so special to you?
While growing up, I heard a lot about Chouca. But not Chouca the route, Chouca the dog! Chouca in fact was my grandparents' dog when they lived in Fontainebleau. The dog died way before I was born, but my dad would often talk about how exited she would get when it was time to go climbing. Maybe as excited as I get? So of course I knew there was a route named after her, but until I tried it, it wasn’t something that was particularly on my mind. When I first tried the route I really liked it, especially the slab at the top, but the beginning felt super hard. Getting to climb the slab was like a reward.

Yes, getting off the ground isn’t easy, especially if there isn't a pile of stones below...
Indeed, Chouca kicks in straight away. I have to stand on tiptoes to grab a two-finger pocket and lock off to the next hold. It’s almost like doing a one-arm pull up. The dyno is also super powerful, but at least now you have a nice glassy black foothold. It gently waits for your foot to slip while you hold a tiny mono with your left hand... Having said that, getting off the ground felt harder than the dyno for me. I needed to engagefully just to get off the ground. Actually, when I started trying the route I couldn’t even do that first move and I remember asking my dad to push me up to the second hold.

The entire route is stern test!
Now that I look back at it, I realise sending Chouca was a real journey, both mentally and physically. Mentally because I was stuck on the idea that I should be able to send 8a+ fast. And physically because the entire starting section is really not my style, with no footholds before move 4. But at some point I found a good mindset and my determination to send this particular route motivated me to train hard. Little by little, the moves started feeling easier. I remember the day when I managed to do the first move straight away. A breakthrough!

So how was the redpoint?
The day I sent, there were something like 10 people at Le Bout du Monde. Some were trying Chouca with a pleasing pile of stones below the start. Before tying in, I took the stones and threw them away because I thought it was fun to gently tease all these strong guys who have so much more power than I do. Everyone has their own ethics and I don’t really care about what other people do. It just feels weird to downgrade the route if you omit the first move.

Earlier on in this interview your father mentioned La Rose. What about this route freed by your uncle Antoine Le Menestrel?
La Rose et le Vampire was actually way more on my mind than Chouca. I remember training for it when I was still living in Barcelona. But then when I tried it, I didn’t really feel like projecting it and I started trying Chouca instead. I think La Rose is a fun route to do if you can climb 8c and do it in a weekend. But Boutdechou, the second pitch of Chouca, looks amazing! And it has its own story that maybe I’ll get to tell you one day if I send. ;-)

Eline, interestingly your father isn’t your personal trainer. Why not? And did he ever give you any good advice?
When I was 12 I started really wanting to be good at climbing, so I asked my dad to be my coach. Surprisingly, he said no. He made a very explicit decision and I remember being disappointed. But he had his own reasons and his decision has shaped our relationship in so many aspects. There are so many examples of father-daughter training relationships that become difficult or even unhealthy. My dad didn’t want to take that risk. At that time though he shared what he had learnt from 40 years of climbing. My friend James Lucas wrote a nice article about this a few years ago, called Lessons from Le Menstrels. I now feel super close to my Dad. I can talk to him about anything, from the frustration of not sending my project to my craziest new idea about changing the world, or my latest heartbreak. We share so much more than climbing. I am grateful and proud of us for this.

Marc, the last question goes to you. More than 40 years have passed since you discovered your love for climbing and Buoux. So what has climbing taught you? And what do you think Buoux represents nowadays?
Climbing for me has been a way to discover my art of life. And Buoux represents a place where life connects with nature, it is one of the most beautiful cliffs I know. With the presence of my mother, my brother and my sister nearby, it also connects me with my upbringing. My mother still climbs there every week. And of course, it connects with climbing performance. A few month ago, I belayed Chris Sharma on Le Minimum. I was proud of what climbing is. And I'm really waiting for the moment that someone finally climbs Le Grand Bombé Bleu. Buoux has not finished revealing itself.

04.03.2000
Buoux, the crag par excellence in France
The crag Buoux in Provence, France. In the mid 80's this cliff was one of the most important in the world and even today it is a paradise for technical sports climbing on pocketed limestone.

22.04.2010
Buoux Face Ouest reopens to climbing
After 25 years the climbing ban at Face Ouest at Buoux has now been lifted.