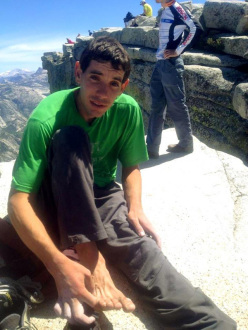 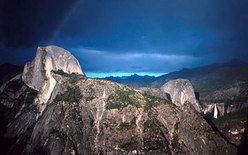 Half Dome after a storm
Photo by Chris McNamara

Alex Honnold on the Thank God Ledge, high up on the Regular Northwest Face route on Half Dome, Yosemite
Photo by www.senderfilms.com

Alex Honnold and the Yosemite Triple Crown solo, the interview

Interview with American climber Alex Honnold after his immense and fast solo of the Yosemite Triple in Yosemite Valley, USA.

We left you last Friday with Alex Honnold's astounding and fast solo ascent of the Triple Crown in Yosemite, the continuous ascent of Mount Watkins, El Capitan and Half Dome. We mentioned that due to its importance and value, it was absolutely worth finding out more about the ascent. So here is an interview with 26-year-old Honnold himself who provides further details and, above all, what sort of a climber (absolutely beyond anything normal) he really is. This mini introduction is needed to underline the fact that to climb the three routes, Honnold needed less than 11 climbing hours, almost always without a rope and without self-belaying.


Alex, where does an ascent of this magnitude come from?
I've been planning to do this for months, and I'd talked to my friends about it a lot; and it was all filmed for the 2012 Reel Rock tour. It definitely wasn't spur of the moment...

Yes, we'd read that you described the Triple Crown linkup with Tommy Caldwell as just a warm-up. So is this solo ascent what you had in mind?
Yes, this is what I had in mind and I'm also hoping to also do a speed ascent of The Nose with Hans Florine some time next week. Let's just say that this is all part of my big wall season here in Yosemite.

We read about 90% free solo while the rest was climbed with aid.
At times I stood on bolts and pins and pulled on fixed gear and things.

Did you ever use a rope?
On Watkins I used a rope for two long pendulum rappels on the first pitch, then I threw the rope back down and did the next 18 pitches with only daisy chains. On The Nose I used a rope a number of times, for the four major pendulums and to rope solo 2 short sections of aid climbing (getting to the Boot and the end of the Great Roof). And for Half Dome I didn't take a rope at all, but used dasies on and off. That's why it's really hard to describe this kind of style. Basically I did anything I could to get to the top and still feel safe.

So what's the next step? Faster? More free?
I'm not sure. Obviously the pure free solo link-up would be outrageous. It seems possible, but kinda crazy. I think that the key to going faster would be to rope solo better. I'm a terrible aid climber and I think this is where I have the most room for improvement. Having said that, free soloing is always going to be inherently faster than aid climbing, so maybe that's the real place for improvement. Basically though I have no idea if anyone else will ever even try anything like this. I sort of made up my own style and I'm not sure if it's really the best way. Hopefully some day someone else will figure out something better.

Do you have the ascent times of the individual routes?
Watkins was climbed in 2:20, which I think is the speed record but I'm not 100% positive. I climbed The Nose in 6 hours, from 9:30pm to 3:30 am. I climbed Half Dome was done in 2:55. I was going much slower at the bottom, but I sped back up near the top. Still though... more than twice the time I'd done earlier in the week.

When you're actually climbing, is being fast in the front of your mind?
Speed is only a by-product of being solo and being efficient. I never consciously try to move fast, only to keep moving continuously. I was never breathing heavily, it was just a steady pace.

With so little gear to take, how on earth could you forget your chalk bag? And seriously though, you decided to launch up The Nose nevertheless...
Haha, the van was a total disaster zone with camera men and my girlfriend and all their stuff. Basically there was too much stuff on the floor and I was too distracted by other logistical things (like who's car would be waiting at the bottom, how would someone get to a different trail head, where would the keys be, etc. etc.) But I suppose I just dropped the ball. Thankfully, I'd actually climbed the Nose with no chalk once before, when one of my friends wanted to do it in a single day a few years ago. So I was practised for that kind of thing. And then a very generous party of aid climbers lent me their chalk bag when I passed them on Dolt.

What was hard?
The hike up to Half Dome was one of the most brutal parts. I just felt tired and weak.

All things considered, did it go as expected?
Beforehand I thought it would be easier than the free triple with Tommy just because the split times on each route are faster, but now having done it I think it's a bit harder, even though it took a little less time. It turned out being a pretty powerful experience for me, which was a little surprising but also really satisfying.

Alex, your soloing is pretty much beyond comprehension and certainly in a realm which few dare to enter. But how about leaving your mark in other ways as well, such as freeing routes? You teamed up with Caldwell and he's certainly got something interesting on the boil.
I've watched all the same films as everyone else... it looks totally heinous. I don't really climb hard enough to seriously try the Dawn Wall, plus Kevin is psyched and fit for it this season. He and Tommy will crush. Having said that, I do hope to free other El Cap routes in the future, this season though I just happened to focus on speed/link up stuff. Maybe next season I'll concentrate more on difficulty.