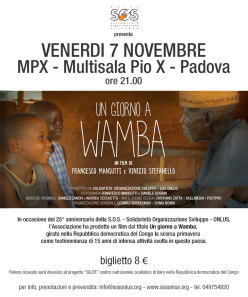 Un giorno a Wamba, the film by Francesco Mansutti and Vinicio Stefanello, filmed in a village immersed in the rainforest of the Democratic Republic of Congo.
Photo by

On Friday 7 November 2014 at Padova the film premier "Un giorno a Wamba". Directed by Francesco Mansutti and Vinicio Stefanello, this documentary was filmed in the small village Wamba immersed in the rainforest of the Democratic Republic of Congo where S.O.S – Solidarietà Organizzazione Sviluppo operates. The film celebrates 25 years of activity of this NGO.


"Un giorno a Wamba", a day at Wamba, will be screened for the first time this evening at Padova, Italy. Directed by Francesco Mansutti and Vinicio Stefanello, this film offers a glimpse into the daily lives of two children who live in the heart of the Democratic Republic of Congo; this is a documentary without rhetoric, one which does not transmit a preconceived idea about Africa, but instead one that simply observes and lends its eyes to the viewers.

Wamba is a village lost somewhere in the vast African rainforest. Located in the NE of the Democratic Republic of Congo, 2,000 km from the capital Kinshasa. On Google-maps it is nothing but a large green spot.

The film is about an ordinary day in the life of two children, Euphrasie and Ignace. From sunrise to sunset, during those 12 hours of light that mark the community's "activity". A time during which electricity is a luxury for the select few and where water, food, health, school and other goods can never be taken for granted and must be earned, with hardship, on a daily basis. Through the eyes of a Westerner the days that Euphrasie and Ignace experience seem both extraordinary and impossible. A life that seems to have no future, if not in the hope of these children and of those who, over there, in that great village of huts in the middle of the forest, fight for a better tomorrow.

A month of filming was needed to make Un giorno a Wamba. 14 years of working in that region were needed for SOS - Solidarietà Organizzazione Sviluppo - ONLUS – to understand Wamba. A synergy that now, to mark the 25th anniversary of the association, will be celebrated with the premiere of this film.

Tickets cost € 8 and the proceeds will go to the Ophthalmologic Center "SILOE" Isiro, in the DR of Congo.