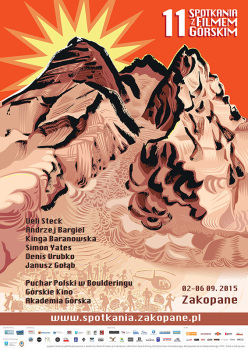 From 2 - 6 September at Zakopane (Tatra Mountains - Poland) the 11th edition of the Spotkania Mountain Film Festival.
Photo by Zakopane

21 films admitted to the international competition from Poland, France, Spain, Holland, Iran, Nepal, Germany, South Africa, Slovakia, Switzerland, UK, USA and Italy. 5 days of screenings and events. 6 special guests (Ueli Steck, Andrzej Barile, Kinga Baranowska, Simon Yates, Denis Urubko, Janusz Golab) and numerous mountaineering lectures and meetings. This, in a nutshell, is the program of the eleventh edition of the Spotkania Mountain Film Festival that will take place at Zakopane (Poland), at the foot of the beautiful Tatra Mountains.

Among the 21 films in competition some will be screed for the first time while others (like Valley Uprising) have already received awards at important festivals. There are also two Italian films: Chris Bonington - Life and Climbs, directed by Vinicio Stefanello (PlanetMountain.com) and produced by Courmayeur for the Piolet d’or Carriere which the great British mountaineer received earlier this year, and Nini by Gigi Giustiniani.