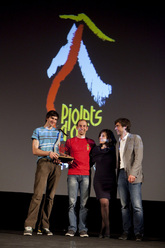 Piolets d'Or 2012: the Slovenians Luka Strazar and Nejc Marcic together with the mayors of Courmayeur and Chamonix, Fabrizia Derriard and Eric Fournier
Photo by Gughi Fassino 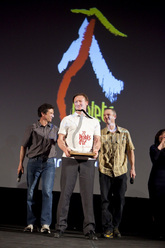 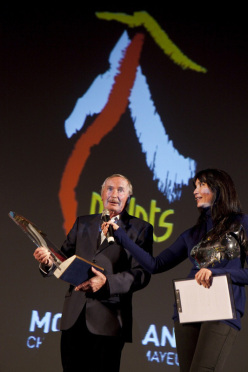 PORTFOLIO / gallery Portfolio: Piolets d'Or 2012, the videos of the ascents

Piolets d'Or 2012, the videos of the ascents

The videos of the six ascents nominated for the Piolet d'Or 2012, awarded to the Slovenians Nejc Marcic and Luka Strazar for their ascent of K7 West (Pakistan) and the Americans Mark Richey, Steve Swenson and Freddie Wilkinson for their ascent of Torre Egger (Patagonia) by Bjorn-Eivind Aartun and Ole Lied received a special mention from the Jury. The videos were created for the award's celebration of the Piolets d'Or 2012 at Courmayeur by Vinicio Stefanello (Planetmountain.com) and Francesco Mansutti.

This three-day alpine style ascent of the previously unclimbed north-west face via a 1,600m sustained mixed route was the third ascent of this famous summit in the Charakusa valley. This young team took their experience of climbing in their home mountains of Slovenia on their first trip to the Himalaya, and used exceptional judgement and commitment on this highly technical climb. The route involved a strong element of exploration and was carried out in minimalist style by a team of non-professional climbers. Ascent by Nejc Marcic and Luka Strazar, Slovenia

The ascent of Saser Kangri II - the second highest previously unclimbed mountain in the world - is an example of classic exploratory alpinism and committed alpine style climbing at high altitude. The summit was reached via the steep 1,700 metre south-west face after four days of ascent and three bivouacs with the main difficulties concentrated in the upper part of the climb. A wealth of experience enabled the team to take a very minimal lightweight alpine style approach in achieving the first ascent of the peak. Ascent by Mark Richey, Steve Swenson and Freddie Wilkinson, USA

This ascent of Torre Egger achieved a new level for technical ice climbing in an alpine environment. The ephemeral line is a hugely creative and imaginative route, and was only possible due to the team’s opportunism. A few days after the climb’s nomination, Bjorn-EIvind Aartun was tragically killed in an ice climbing accident in Norway, along with Stein-Ivar Gravdal. Aartun’s partner from Torre Egger, Ole Lied, was unable to attend the 2012 Piolets d’Or. The organisers, jury, and the rest of the nominees express their sympathy and support for Ole and the entire Norwegian climbing community. Ascent by Bjorn-Eivind Aartun and Ole Lied, Norway.

Pik Pobeda is the most northerly 7,000-metre peak in the world. A high altitude symbol for mountaineers on the Asian continent, its steep and exposed north face is 2,500 metres high. Kazakhs Gennadiy Durov and Denis Urubko added a fourth route to the central and highest part of this face, below the summit. Dollar Rod is a committing and technical route undertaken in alpine style, a modern feat. Last November it was awarded the sixth Asian Piolets d’Or.

Xuelian North-East was the last remaining unclimbed 6,000m peak in the Xuelian Feng, in the Chinese Tien Shan. Slovenians Ales Holc, Peter Juvan and Igor Kremser climbed it in pure alpine style, taking the long and aesthetic north-west ridge over four days, and then descending on the south-east side in a day and a half. The technical difficulty and length of this route, climbed in minimalist style, caught the attention of the jury. Attempted by many expeditions since 1986, this incredible route on the east pillar of Meru Central – the Shark’s Fin – was climbed in its entirety for the first time by Americans Conrad Anker, Jimmy Chin and Renan Ozturk. This particularly aesthetic route has all the difficulties of modern alpinism; rocky terrain involving difficult free climbing and committing aid climbing, and delicate mixed terrain in the upper section.