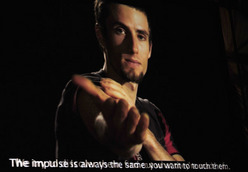 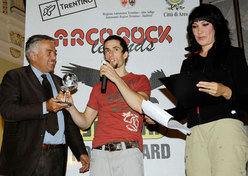 The President of Salewa Heiner Oberauch giving the prize to Patxi Usobiag, winner of the Salewa Rock Award 2007
Photo by Giulio Malfer 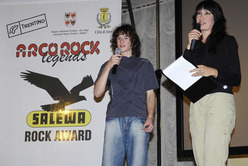 The Arco Rock Legends point the way towards the future of rock climbing. And up there leadng that way are Patxi Usobiaga from Spain, who last night won the Salewa Rock Award, and David Lama from Austria, winner of the La Sportiva Competition Award. Judging by the applause when the names were proclaimed in the "Legends" roll of honour, these two climbers wholly represent that irrepressible desire to climb and the future of this sport.

Patxi Usobiaga celebrated his 27 birthday yesterday and he certainly couldn't have done so in better style: the Salewa Rock Award truly symbolises a much desired and hoped for goal. The strong climber from Elibar (located deep in Spain's Basque country and which is, unsurprsingly, also home of the 2006 Salewa Rock Award winner Josune Bereziartu) came to the Arco Rock Legends with a staggering two nominations, one for each category. He was the only athlete in the running for both the Rock and Competition award, and this too is an important recognition and indication of his versatility and enormous energy which nets him a prime position in both climbing outdoors and competitions. So much so that last year Usobiaga was the winner of the extremely difficult World Cup Lead.

In the end the Jury comprised of 14 of the world's most important specialised climbing magazines assigned the Salewa Rock Award 2007 to Patxi Usobiaga for his "capacity in climbing an impressive number of top-end routes, excelling both in on-sight ascents and redpoints. His fast style of ascent is a reference point for modern sports climbing." His climbing is without a doubt complete and Usobiaga is a true vertical globetrotter who distinguishes himself for the enormous amount of hard ascents and for the speed and intensity with which these come about. This Salewa Rock Award 2007 goes to his passion, consistent approach and style. To a true love for climbing which, for Usobiaga himself, translates into "climbing and training every day, because I simply can't do without it..."

Passion and enormous talent were the Leitmotif therefore and this, combined with the young age of many of the nominees, was the hallmark of the Arco Rock Legends 2007. Just think about 14 year old Adam Ondra from the Czech Republic who amazed the world with his recent sport climbing, bouldering and multi-pitch ascents. Or think about 17 year old Daniel Woods from the U.S.A. who brought some of his great bouldering verve to the CasinÃ² stage.

And one mustn't forget Andreas Bindhammer's "tranquil" passion (at 33 the "oldest" candidate for the Salewa Rock Award); the great German master of climbing and constancy shared some of his calm and wisdom with the spectators. Nor must one forget the other great crazy climber Dave Graham, who unfortunately could not make it to Arco for the Awards. These are all first-class candidates, and certainly the Jury (presided by Fabrizio Miori, the councilor for the Environment, Sport, Tourism and Commerce) had no easy task in selecting one single winner.

But if the "rock" category proved difficult, perhaps the selection for the La Sportiva Competition Award proved (if possible) to be even harder still. The Jury had to choose between the true champion Angela Eiter who at a mere 20 years of age has already won (numerous times) everything there is to win (including the first ever La Sportiva Comeptition Award), and Patxi Usobiaga (mentioned previously) and Austrian David Lama who in 2006 amazed all with his super champion senior competition debut. In the end the Jury justly recognised Lama's class, this true talent which netted him top results in the world competition scene, unthinkable of for a 17 year old. This is cetainly the future of sports climbing.

A future which, as a splendid and extremely competent Kay Rush stated at the end of the ceremony, is already a reality with tomorrow's XXI Rock Master, the competition reserved for the best of the best.