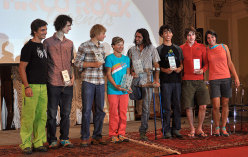 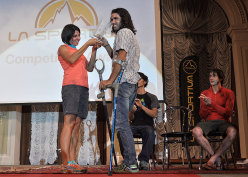 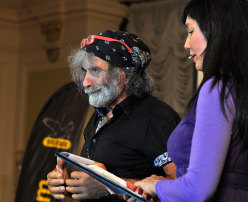 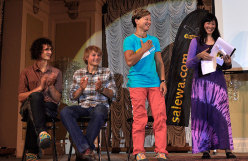 On Friday 29/08/2014 during the 9th edition of Arco Rock Legends the Salewa Rock Award was won by Muriel Sarkany while Urko Carmona Barandiaran won the La Sportiva Competition Award. The Climbing Ambassador by Aquafil award was assigned to the Italian writer, sculptor, alpinist and rock climber Mauro Corona.

Mauro Corona who remembered Roberto Bassi. The gentleness of a climber and man reflected in those smooth dolphins he had carved in wood and that stand out from all those other tiny sculptures carved, over the years, by climbers who went to Erto and visited Corona's workshop. It was touching that Corona recalled Bassi, the man who pioneered sport climbing at Arco (and not only). And it was beautiful to see the excitement (dare we say joy even) with which last night Corona accepted the award Climbing Ambassador by Aquafil last night during the ninth edition of the Arco Rock Legends. The motivation read as follows: "For his passion and the visions he managed to donate to the climbing world, bringing it to the attention of the larger world of art and culture." "Climbing is one of the few things that still makes me, dare I say it, happy," exclaimed Corona as he thanked the huge audience and numerous climbers.

Happiness is a feeling that is difficult to declare, and yet a word that is frequently abused. This certainly isn't the case of Spain's Urko Carmona Barandiaran. The incredulity with which realised that he was the winner of the La Sportiva Competition Award - the prize for last season's best competition climber - was truly moving. Just like the explosion of joy from the audience while they cheered the European Paraclimbing champion as he lifted up his trophy. His subsequent dedication was beautiful, to all his "Compañeros paraclimbers." Yes, he won this year's competition climbing Oscar "For the spirit, style, strength, and smile with which he deals with competitions and life in general, inspiring everyone to be a better person" is what the international jury comprised of 10 of the world's most important climbing magazines wrote. And no one, including other two nominees - Russia's ace bouldering champion Dmitri Sharafudtino and Japan's Lead winner Sachi Amma - had any doubts whatsoever. The standing ovation Urko received was fully deserved!

There was great excitement for the Salewa Rock Award, too, for the prize that recognises the best climbs outdoors. Belgium's Muriel Sarkany is a great competition champion from the past and, in her second life away from the comp circuit, she has transferred her passion for climbing onto the rocks and achieved a life-long dream: her first 9a. The Salewa Rock Award went to her "For the joy, passion and great results achieved on rock, as a natural progression from her great career as competition champion." Joy once again. The same that could be seen in the eyes of the other two who had both been nominated for the award, the champion of champions Adam Ondra (4-times winner of the Salewa Rock Award) and the star of climbing, Germany's Alexander Megos. Yes, last night at the Casino Arco it really did seem as if there was some joy in the air. Or at least something that looked a lot like that happiness that can come from the pure and simple spirit of climbing. And the smile of Kay Rush, as ever the splendid presenter at the Awards, is another small proof of this.

Alexander Megos – Germany
After last year’s 9a onsight, Megos certainly didn’t glued to the sofa. On the contrary, the stopwatch has become the new yardstick to measure his achievements, with 9a+ repeats in less than 2 hours. More impressive though, he has begun to make first ascents at breakneck speed.

Adam Ondra – Czech Republic
Ondra is out to get everything. This year he freed three 9b’s and one 9b+ (the third 9b+ in the world, all his) and, as the only person in the world, he onsights two 9a’s. To date he has climbed almost 100 9a’s or harder, an astounding record. Unsurprisingly he has already won the Arco Rock Legends Awards four times.

Muriel Sarkany – Belgium
Just one route, but what a line! After injuring her wrist and a long lay off, the strong Belgian – known for her thousand victorious competition battles – travelled to the Gorges du Loup to win the fight against a 9a. Another historic feat, for her personal curriculum but also for female climbing

Sachi Amma – Japan
For the second year running the Japanese has proven that he’s the man to beat in Lead competitions. But he’s also a force to be reckoned with in bouldering, too, as can be seen from his 3rd place in the Combined ranking

Urko Carmona Barandiaran – Spain
The Spaniard is the man to measure against, and he confirmed this not only this season, but also in 2012 when he won the World Championship. Determination and a smile are his hallmarks, in competitions and elsewhere.