► News ► Events ► Melloblocco 2014: day one, sunshine for everyone
Versione italiana 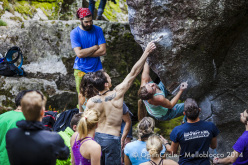 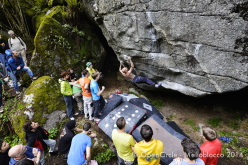 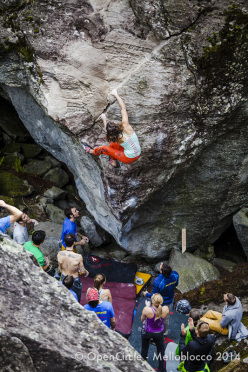 PORTFOLIO / gallery Portfolio: Melloblocco 2014: day one, sunshine for everyone

Melloblocco 2014: day one, sunshine for everyone

The sun's rays embraced Melloblocco and Val Masino today. A superb present that the more than 1000 registered Melloblockers capitalised on fully. Each in their own way, of course.

And so everyone, each in their own time, on their own problems and difficulties, started to... climb. Up every boulder in the valley and on every rock face. The simple rule, elementary even, is that of bouldering. Look for a problem, open the crash pad and try to reach the top. It's not important how high it is, whether its impossible or easy, time will tell. Because, at the end of the day, this is the intrinsic beauty of it all.

It's clear that this is all done with friends. Because bouldering and Melloblocco are a collective game. No one is a loner here. People socialise, better still, they come here to be with others. When climbing, but also throughout the "extra time", during the evening parties and those encounters on the great Mello parterre, that magic garden in the mountain sports centre with its adjoining Mello Village. This is the heart and soul that brings the Mello folk together when (and if) they stop climbing. All of this follows the rhythm of the eternal mountains, the rock faces, waterfalls and thousand granite boulders that are scattered throughout this valley of wonders. Perhaps it is because of this rhythm dictated by nature, and by her beauty, that the atmosphere at Melloblocco is always so relaxed, so free. Or maybe it's just Melloblocco.

The fact of the matter is that even the yearned-for "circuit" of competition problems – the famous 9 male and female problems set for the champions – was marked by its relaxed atmosphere and fair play. But this is nothing new: Melloblocco has always distinguished itself for its style. A style that seems to have infected the numerous top climbers today. Starting with Gabriele Moroni who celebrated his record-breaking 11th Melloblocco today with 5 tops, the same number as last year's winner Stefano Ghisolfi, followed by Anthony Gullsten with 4 problems and, with 3 problems, Francesco Vettorata and Sachi Amma (the Japanese managed to flash his 3). Jenny Lavarda proved her form with 5 tops, equalled by ever-strong Barbara Zangerl, by Mélissa Le Nevé and by ex Bouldering World Champion Yulia Abramchuk. These were followed by Day 1 revelations Giada Zampa and 14-year-old Giorgia Tesio who sent 4 problems, while Alexandra Ladurner, Giulia Alton and Roberta Longo sent 3.

It has to be said that once again Simone Pedeferri - the climber and artist who invented, brushed and cleaned the competition problems – made miracles happen. For example, one of the 2014 competition problem areas, the "Scivolo" next to Sasso Remenno, is a real-life bouldering garden. Kissed by the rays of sun that illuminated the massive waterfalls throughout the valley and provided the Melloblockers with strength.

The first Après-climb appointment this evening will be tasting the great local wines and typical Valtellina dishes. The evening then continues with the official presentation of the adidas athletes and this is followed by Steve McClure (Marmot) and his "A Window of Opportunity", by Jacopo Larcher who will present his video "Zembrocal – Back to La Reunion". Last but not least, the great film "Cerro Torre – A Snowball’s Chance in Hell", starring David Lama and directed by Thomas Dirnhofer and produced by Red Bull Media House.

And then the dancing begins ... beneath the moonlight. And tomorrow everyone will continue, to climb of course!


Info and program on www.melloblocco.it