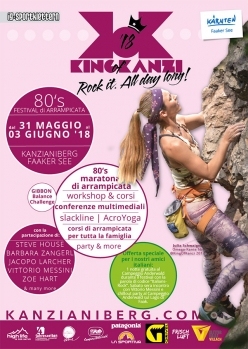 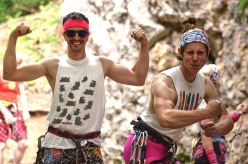 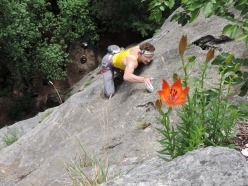 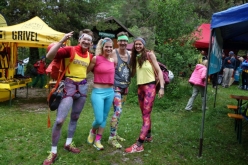 King of Kanzi 2018, the 80's Climbing Festival in Austria

At the end of May and start of June the crags around the picturesque lake Faaker See in Austria will host the fourth King of Kanzi climbing festival, the meeting with a 1980’s theme at Kanzianiberg. Boasting over 300 routes, this area is one of the largest and most important sport climbing areas in Austria. After that period of initial discovery period in the ’70’s, along came the early 80’s and with them Lycra tights and colourful outfits that act as the main theme of this festival.

Designed for the whole family, the festival offers a series of courses and workshops such as climbing course for women only with Barbara Zangerl, an expert climbing course with Jacopo Larcher, a climbing workshop with Steve House and much more. Throughout the day it will be possible to slackline, do acro-yoga, take part in the boulder workshop or ascend the via ferrata with the mountain guides, while when the sun goes down there are a series of evening shows. Vittorio Messini will talk about his mountaineering in Pakistan and India, Larcher and Zangerl will discuss their free ascent of the difficult big wall Magic Mushroom on El Capitan in Yosemite, and America’s Zoe Hart, mountaineer, mountain guide and mother of two small children, will unveil her recipe for family fun in the mountains.

One of the highlights of the festival is obviously Sunday’s climbing marathon open to all and split into various categories. 8 hours to climb and collect as many points as possibile; the team with the best 80’s outfit will be awarded the coveted Golden Lycra Pin…

For futher information check out: www.kanzianiberg.com