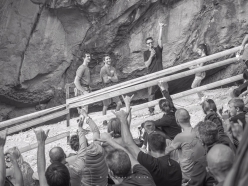 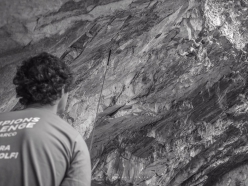 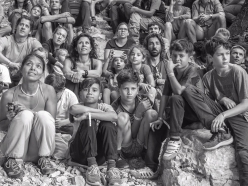 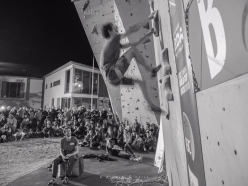 The photos taken by Giampaolo Calzà and the thoughts of Stefano Ghisolfi and Adam Ondra about the recent Champions Challenge, the climbing event that took place last Saturday at Arco, Italy.

Adam and Stefano: best and worst thing about climbing together!
Stefano:
The best thing about Adam is that he never stops, he continually motivates you to climb and give your best. Every time I climb with him my motivation increases to climb even harder and try and be as good a him. The worst thing about Adam is that he never stops, it's hard to keep up with him and he's never tired. The day after a training session with him I’m in pieces and I just can’t comprehend where he gets all that energy!
Adam: The best thing about Stefano is that we both share the same passion. We motivate each other and end up climbing even harder. The worst thing is that he’s incredibly strong, in terms of pure power, especially on pinches and dead hangs. If I climb with Stefano I always feel kind of weak, which doesn’t really happen that often! Luckily though I can often find my way around this, with some heel hooks or crazy drop knee.

Apart from a hold that broke on the climb Alcatraz at Massone, is there anything that surprised you?
Adam:
I was surprised how much the people enjoyed the entire show, the climbing and interviews. At the end of the day I had a really good feeling that Stefano, the spectators and I had enjoyed the whole day. I think the interaction between myself, Stefano and Simone Raina worked really well for everyone.
Stefano: Yes, I was surprised by how many people came to watch us, many even traveled from afar, there were lots of children and youngsters. A lot more people than last year!

Is there anything in particular that you wanted to share?
Stefano: The true value of the Champions challenge was to demonstrate the relationship that can exist between two competitors, and to show both aspects of climbing: competitions and on rock. It’s usual to see top athletes perform outdoors, far easier to watch them at competitions, and the Arco Champions Challenge showed all of this in just one day!
Adam: Well, I feel extremely lucky to have this passion for climbing, to have found it so early, and and to have developed as a climber all my life. This makes me happy and I wanted to get this fun I have with the spectators. Saturday was really chilled and relaxed and I’ pretty sure this joy was visible for everyone.

As you said, there were lots of children asking for autographs
Stefano: Children are always the kindest and most friendly, and we signed loads of t-shirts. I hope I inspired them and that they’ll be more motivated to climb and have fun while climbing!
Adam: It’s amazing to have climbing as the thing I like the most and also as my job, it’s a perfect situation. So I’m always glad to give something back to the climbing community - in this case inspiring young kids by taking photos with them or signing autographs.

After working the route at the Climbing Stadium, trying to onsight the climbs at Massone, demonstrate the Speed route and the try the after-work route, were you guys finally tired?
Stefano: I was tired, and the next day we went to take some pictures with Paolo Calzà but I don’t know what they’re like because I was exhausted. An event that lasts all day isn’t easy, there wasn’t much time to rest but, having said that, at the end of the day I was happy and in that instant didn’t actually feel too tired because I’d had fun.
Adam: I was definitely very tired after the second route in Massone! Such a long route, incredibly pumpy, some rests but never good enough to recover completely. At the end of the day though I felt fresher than before, because although the Rock Master route had some hard sections, it was a bit easier than the route at Massone. The next day when we went to take some photos at another amazing crag in Arco I actually felt quite good!

You mentioned them: what were the routes like prepared by Alfredo Webber and Alessandro Corradini?
Stefano: The rock routes were provided specifically for the Champions Challenge by the route setters Alfredo and Alessandro, something which can’t be taken for granted and was much appreciated. This summer they worked hard at setting the routes and were happy that someone tried them. They did an amazing job.
Adam: the first route, Alcatraz, is nice, bouldery, on small holds. A tough challenge which I think we’d have done had it been flash. But there was no chalk at all, there were no signs to follow, it was a really pure onsight attempt. Armageddon is the longest route in Massone, incredibly pumpy, with some rests but they’re not great. It was nice to see that the crag still holds some potential. Alfredo and Alessandro did a good job this summer and they’re motivated to produce more. I wouldn’t be surprised if next year we maybe see a 9b at Massone.

The long day came to an end on the route set by Severino Scassa and Cristian Brenna?
Stefano: In the morning the route seemed easy, but I hadn’t reckoned with how tired we’d been the evening, while they had. The moves were really beautiful and not particularly obvious, not easy to read but intuitive as you climbed them. I thought I’d send it easily, but I had to fight on the last few holds, so it really was set perfectly!
Adam: I agree, I think the route they set was just perfect. In terms of style, a little more old school perhaps, something like routes set in World Cups 10 years ago. I really like that style: some sketchy moves, some powerful sections, pumpy, some knee-bars to entertain everyone. Had we tried to onsight it in the morning I think we would have both succeeded, but being at the end of the day it proved an interesting challenge. Spicy, for sure. Yes, just perfect.

11.10.2018
Champions Challenge: Adam Ondra - Stefano Ghisolfi interview before Saturday showdown
Double interview with Stefano Ghisolfi and Adam Ondra who on Saturday 13 October 2018 at Arco di Trento (Garda Trentino), Italy, will take part in the Champions Challenge. This event is open to all; from the Climbing Stadium artificial wall to the historic Massone crag, this promises to be a day of climbing, fun and friendship.