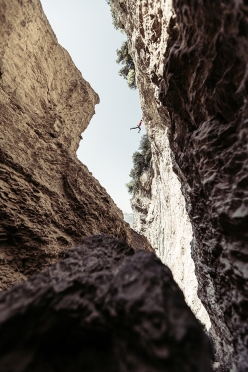 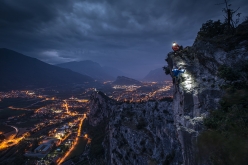 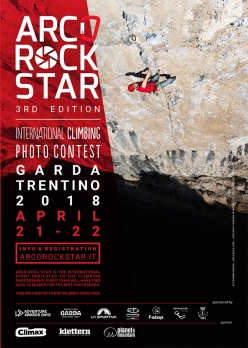 Arco Rock Star 2018: on 21 - 22 April the extraordinary vertical rock faces of Garda Trentino will be the scene of the third edition of the , the international contest of climbing photography.
Photo by Adventure Awards

From 21 to 22 April 2018 Arco (Garda Trentino) will host the Adventure Awards Days and also the international climbing photography contest Arco Rock Star with some of the best outdoor photographers in Europe. Everyone can compete in the Open category; registration now online.

On the 21st and the 22nd of April, the extraordinary vertical rock faces of Italy's Garda Trentino will be the scene of the third edition of the Arco Rock Star, the international climbing photography contest. Two days during which athletes and photographers will go in search of the photo that best describes the athletic gesture, but also the landscape and everything that revolves around climbing - from the fatigue to the smiles, from the sunsets to the beers. In short, a story of passion for climbing and for photography.

The professional photographers, from 5 different European countries, are among the best of the outdoor world: Stefan Schlumpf (SVI), Thomas Schermer (GER), Claudia Ziegler (GER), Piotr Deska (POL), John Tornton (UK) and the Italians Matteo Pavana, Federico Ravassard, Paolo Sartori and the winner of the 2017 edition Giovanni Danieli. Also international climbers such as Angelika Rainer or Nicolas Favresse will climb with them.

Registrations for the Open category, are still open, both online on the website www.arcorockstar.it or directly at Arco before the event.

For each team, a photographer and maximum three athletes. Each team must present photos which are able to describe the athletic gesture, but also everything that surrounds climbing, such as the environment, friendship, the approach, the fatigue and happiness The best photograph of the Open category will receive a prize of € 500, while the best photos of the Pro category (each team must submit 4, which will be evaluated as a whole) will be rewarded with € 1500. For the second and third classified material prizes.

The news of the third edition is the special prize “La Sportiva Anniversary”, with which Arco Rock Star celebrates the La Sportiva 90th anniversary. Open to the PRO and OPEN categories, the "Anniversary" contest will be a tribute to climbing and alpinism of the past, supported since the beginning by the Trentino brand. The award-winning, climbing-themed photo will be the one that, with greater imagination, emotion and beauty, will tell the essence of mountaineering of the past through atmosphere, clothes or equipment. No thematic constraints besides this.

Arco Rock Star will begin Saturday 21st of April in the morning and the photos will have to be delivered before 3pm on Sunday 22nd. The jury will evaluate the images and the award ceremony will be held the happy hour on Sunday.
Friday 20th, the briefing, not mandatory, with the team: an occasion to have a beer all together, before before heading off with the backpack, the rope and the camera.

The event takes place within the Adventure Awards Days, the International Festival of exploration, the seventh edition will be held from April 20 to the 22nd in Garda Trentino: adventure and shows, activities and meetings with great travelers, adventure lovers and explorers will meet to share stories, experiences and passions. On stage, every night, great explorers and international alpinists.

Garda Trentino, the world of water, rocks and nature with Mediterranean scents embedded in a ring of vertical walls, becomes the ideal stage for a meeting aimed at an increasingly wide audience of fans of the style of life and the outdoor holidays.