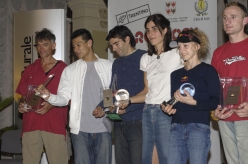 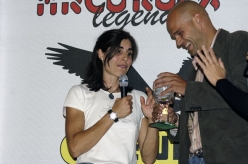 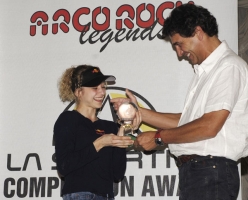 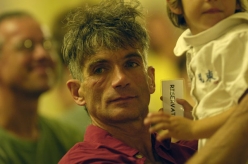 Arco 2 September 2006. Two women, two great climbers illuminate the skies of world sports climbing. With Josune Bereziartu, representing the "rocks" and Angela Eiter representing "competitions" it's the other half of the sky which reaches the apex of world climbing. This was decreed by an international jury comprised of the most important climbing magazines worldwide. And the incredible spectators who had come to watch the show, the first oscars of sports climbing, enthusiastically gave their seal of approval. It all happened on Friday night in Arco (Trentino, Lake Garda, Italy) during the first edition of Arco Rock Legends, the event organised by the Arco Rock Legends Association in collaboration with the Autonomous Province of Trento, Arco Town Council, InGarda, AMSA Spa, Salewa and La Sportiva.

34 year old Josune Bereziartu from the Basque country, Spain, received the first ever Salewa Rock Award - which goes to the climber who distinguished him/herself most on bolted sports routes, taking into consideration both the performance and how he/she managed to influence the style and ethics of sports climbing - for her ability in raising the grade of female climbing, taking it to the maximum levels of sports climbing, from 8c to 9a/a+. Noteworthy ascents include, amongst others, Bimbaluna, Saint Loup (CH) in 05/2005 and her 8b+ on-sight of Hidrofobia a Montsant, Spain.

For her part, 20 year old Angela Eiter from Austria received the first La Sportiva Competition Award - which goes to the athlete who distinguished him/herself in competition climbing (Lead, Boulder or Speed) throughout 2004/2005 - for her near complete domination of the World Cup Lead 2005 and 2004, her victories in the World Championship 2005, the World Games 2005 and Rock Master 2005 and 2004.

“It wasn't easy choose on the winners” stated Jury President Fabrizio Miori (Academic of the Italian CAI Mountaineering Club and Arco Town councellor for Sport Tourism). “All 5 nominees for the Award are truly exceptional climbers, the best in the world. It was an impossible task to choose just one, they were all worthy of first place”.

In effect the list of nominees selected by some of the most important international climbing magazines was an impressive one. Bereziartu was in the running for the Salewa Rock Award together with Daniel Andrada from Madrid (the true strong man of the Spanish crags) Yuji Hirayama from Japan (the legendary climber who produced unbeatable results both in competitions and on rock), and the American Chris Sharma, a mythical figure representing the new vogue of climbers. Last but by no means least, the true sports climbing legend Maurizio “Manolo” Zanolla. Incredibly the 48 year old is still at the cutting edge of sports climbing after having been one of its prime movers at the start of the '80's. In the end though it was the radiant, involving and strong-willed Josune Bereziartu who "won" the award, after having taken women's climbing to the maximum level of all times... an extraordinary, if not unique, feat.

The La Sportiva Competition Award was contended by Angela Eiter, Flavio Crespi (the first Italian to win the World Cup Lead in 2005, provisional 1st in the world ranking and current leader of the World Cup 2006), and Tomasz Mrazek from the Czech Republic, the reigning World Champion. This formidable list of three nominees has without a doubt left its mark of sports climbing competitions during the last few seasons. In the end it was Angela Eiter's undisputed dominion which was rewarded: with impressive regularity the 20 year old queen of competitions has won everything, or almost everything, there is to win.

So it is two women who take first place in the Arco Rock Legends Hall of Fame. Perhaps it didn't come about by chance therefore that this first evening was presented by Kay Rush, the famous journalist, radio and tv presenter and, above all, keen and active sports climber. Yes because, if the enthusiasm and applause for the winners and all other nominees of the Salewa Rock Award” and the “La Sportiva Competition Award” is anything to go by, then it is the passion for climbing which unites all, without distinction, in this great vertical game.

While the curtains fall on Arco Rock Legends 2006 the stage will already be set for the next climbing oscars in 2007. In the meantime though the Rock Master begins here in Arco today, Saturday 2 September. This is the competition reserved for the best of the best only: the legend continues...