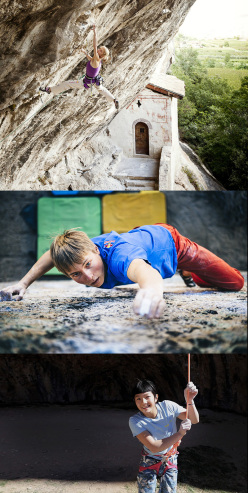 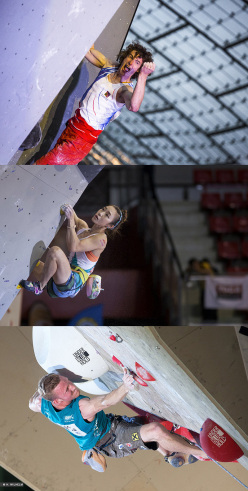 On Friday, September 4, 2015 the Arco Rock Legends will celebrate its 10th edition and assign the prestigious Salewa Rock Award and La Sportiva Competition Award during the Rock Master Festival and the World Youth Climbing Championships 2015. Those nominated for the sport climbing Oscars are Angela Eiter, Alexander Megos and Ashima Shiraishi, while those in the running for the La Sportiva Competition Award are Adam Ondra, Jain Kim and Jakob Schubert. The prestigious Dryarn Climbing Ambassador will be awarded to John Ellison, founder of the initiative Climbers against Cancer.

Ten years of Arco Rock Legends. Ten years of the best climbers in the world celebrated - just like real silver screen Oscar stars - in the Italian town of Arco. A decade, in short, of the best of the best. This is the important anniversary that will be celebrated on Friday, September 4 during the most important sport climbing competition in the world, the Rock Master Festival. Yet again this event has mutated and from 28 August to 6 September it will also celebrate the World Youth Climbing Championships 2015; over a thousand young climbers from across the globe are expected and Arco, and the Arco Rock Legends, are currently adding the finishing touches to celebrate this absolutely unique event.

As is well known, the prestigious Arco Rock Legends is split into two categories, the Salewa Rock Award for those who excel outdoors, on sports climbs and in bouldering, and the La Sportiva Competition Award for the athlete who distinguishes him or herself in competitions. Affirming the best of the best isn’t an exaggeration: over the last decade these coveted prizes really have been awarded to all the strongest climbers on planet earth, to all those who have left an indelible mark of their overwhelming love for this fascinating fight against gravity.

Salewa Rock Award. In 2006 Josune Bereziartu paved the way for the hardest female difficulties, the following year Patxi Usobiaga surprised everyone with the world’s first 8c+ on-sight, Adam Ondra dominated the scene for four years in a row, Chris Sharma "the king" certainly didn't abdicate, nor did queen Sasha DiGiulian, followed by the woman of a thousand battles, Muriel Sarkany... and now? Now the jury comprised of a pool of the most important international climbing magazines has selected three outstanding candidates: Angela Eiter, Alexander Megos and Ashima Shiraishi. The Austrian is one of the most successful competition climbers of all times and after winning the first-ever La Sportiva Competition Award ten years ago, the four-times World Champion and six-times Rock Master winner is back again, this time for the Rock Award. How come? Easy: after bidding farewell to competitions in 2013, Eiter has consistently demonstrated that she is definitely one the strongest. Three 9a redpoints, a handful of 8c+, one 8B boulder and an 8c+ first ascent… always with a smile. An example for everyone. Just like German climber Alexander Megos, who checks in with his third nomination in three consecutive years. No one will forget the world’s first 9a on-sight, that occurred "almost by chance" in Siurana in 2013, just like no one can ignore the fact that ever since then Megos has been dictating new rules: read repeats in a matter of hours, the historic 9a+ reference route Biographie in a day and a flurry of tough new sport climbs just about everywhere, not just in his home Frankenjura. Megos is no longer the new kid on the block, the stranger who came from nowhere. He has matured, consolidated and confirmed his stellar talent and is now an undeniable and important reference point for all. Talking about stellar talent: what about young Ashima Shiraishi? Even the New York Times has noticed her, realised that at a mere 10 years of age the young American was pushing the limits of female climbing, not only in bouldering but also on sports climbs. Shiraishi is 14 now, has a record-breaking list of ascents to her name and, above all, the future of her seemingly limitless talent in her hands. The winner of the X Salewa Rock Award will be decreed by the jury on Friday, September 4, 2015, during the special awards ceremony conducted by Kay Rush, the journalist and great lover of everything that has to do with the outdoors.

La Sportiva Competition Award. Eiter, as mentioned, won the first award in 2006 and the Hall of Fame continues with the pure class of David Lama who then took his talent to the world’s toughest mountains, with Maja Vidmar and her endless battles, with Kilian Fischhuber who won more bouldering competitions that anyone else, with Akiyo Noguchi and her noble fighting spirit, with Anna Stöhr and her sparkling smile, with Mina Markovic who showed everyone the meaning of 'determination' and with Urko Carmona Barandiaran who taught all of us something special. Following in these footsteps is no mean task and those who aspire to do so this year are Adam Ondra, Jain Kim and Jakob Schubert. Three world-class athletes, all three of whom have already been nominated in the past without having ever being officially consecrated to the competition "Hall of Fame". Ondra is banking on his historic double - Lead World Champion and Bouldering World Champion - a feat no one has every managed to achieve previously. Kim dominated the rope competitions like no other, winning both the Lead World Championship and, for the third time, the Lead World Cup. And Schubert? Despite his finger injury, last season the Austrian won his second Lead World Cup. An almost impossible feat that speaks volumes of the valor of this authentic climbing machine.

As mentioned, the winners of the Salewa Rock Award and the La Sportiva Competition Award will be unveiled during the special awards ceremony that have always been celebrated just like the night of the Oscars. This is a truly special moment, also to meet the winner of the prestigious Dryarn Climbing Ambassadorprize awarded to a sports person who has contributed to the culture of climbing worldwide. This year the prize will go to John Ellison, the founder of Climbers against Cancer, the initiative that promotes and raises awareness in the battle against this universal illness that touches, directly or indirectly, almost all of us. Over 400,000 euros raised and more than 20,000 CAC T-shirts, in all colors of the rainbow worn by climbers from around the world, are a clear demonstration of the overwhelming support from the climbing community. Thanks also to Ellison who, through his constant positivity and by "feeding" off the energy of the climbers, has never ceased to fight against his illness. On Friday, September 4, 2015 the Englishman will take the centre stage along with all the other nominees to celebrate the tenth Arco Rock Legends. One thing is certain already though: it’s going to be a great climbing celebration.

SALEWA ROCK AWARD 2015 NOMINATIONS (in alphabetic order)
Period: from June 2014 to May 2015
Angela Eiter, Austria
What's left to say about Eiter? The most successful competition climber of all times (and winner of the first La Sportiva Competition Award ten years ago) proved this year that, outdoor too, she's certainly one of the strongest. Three 9a redpoints, a handful of 8c+, one 8B boulder, one 8c+ first ascent... and always with a smile. An example for everyone.

Alexander Megos, Germany
No one will forget the world's first 9a onsight three years ago. And no one can ignore the fact that since then, Megos has been creating new rules, repeating routes in just a few hours, Biographie the same day while establishing a myriad of hard climbs just about everywhere he goes. Unsurprisingly he's already been nominated twice for this award...

Ashima Shiraishi, USA
Small, young, the future is in her hands. That crimp like few others to achieve climbs that are simply incredible. Her 9a repoint at the crag and 8B+ boulder place her up there among the world's best, at a tender age of 13. An apparently limitless talent.

LA SPORTIVA COMPETITION AWARD 2015 NOMINATIONS (in alphabetic order)
Period: competition season 2014
Jain Kim - KOR
The South Korean dominates Lead climbing like none other: she is the reigning World Champion, for the third time she wins the Lead World Cup. Nominated in 2011.

Jakob Schubert - AUT
Despite a finger injury, the Austrian climbing machine achieved the impossible and won his second Lead World Cup. Nominated in 2012 and 2013.