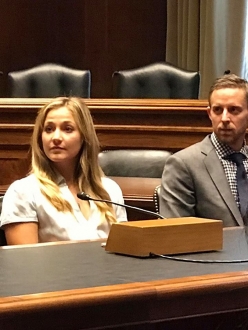 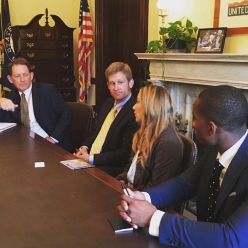 In order to protect America’s National Monuments, yesterday the climbers Sasha DiGiulian, Alex Honnold and Tommy Caldwell traveled to Capitol Hill in Washington together with Libby Sauter and Kai Lightner where they voiced their concerns with the American Senate.

With the inauguration of Donald Trump on 20 January, the American outdoor community is in turmoil. In April the new American president issued an executive order to examine the Antiquities Act and national monuments designated since 1996. According to the American Alpine Club this review could threaten access to millions of acres of public land (which include the big National Parks) which are currently protected. In the list of 27 monuments under review there’s also the famous Bears Ears National Monument - the first monument that specifically acknowledges rock climbing as an appropriate and valued recreation activity - created by Barak Obama at the end of his mandate and which should have permanently protected Indian Creek, Lockhart Basin, Arch Canyon, Texas Canyon, and many other sandstone climbing areas.

The American Alpine Club, the Access Fund and various other organisations immediately rallied to protect these public lands. Yesterday, Thursday 11 May 2017, the climbers Sasha DiGiulian, Alex Honnold and Tommy Caldwell were listened to by the American Senate while they explained the importance of these lands, not only for climbing purposes but for everyone. The three lobbied at Capitol Hill in Washington DC with other climbers including Libby Sauter and Kai Lightner. DiGiulian explained: "We’ve been in meetings talking about the economic infrastructure that climbing brings to areas, new job opportunities, the reason that we need to protect public lands, meeting with a lot of powerful people, which is intimidating, but also exciting."