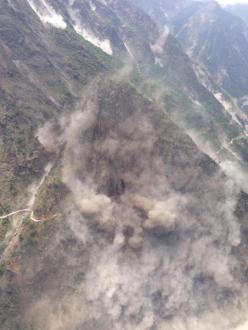 Shocking image from Dr Lalit flying over Namche Bazar during the earthquake on 12 May 2015. Photo
Photo by Doctors for Nepal / doctorsfornepal.org

At 12:35 local time today 12 May a violent new earthquake struck Nepal. According to the US Geological Survey the epicenter was close to Namche Bazar and therefore in the Everest area.

Two weeks after the earthquake that devastated Nepal resulting in more than 8000 dead, today at 12:35 local time another major earthquake struck the country reaching a magnitude of 7.3 on the Richter scale.

According to the US Geological Survey, the epicenter was located circa86km to the west of Namche Bazar, perhaps the country’s most important hub fro trekking in the Khumbu valley and the Everest region.

Tremors were felt as far away a India and Bangladesh resulting in at least four victims according to the BBC, but obviously it is far too early to evaluate the extent of the damage. The earthquake has struck at a time in which a vast humanitarian relief operation is attempting to help the country, at its knees after the magnitude 7.8 earthquake that struck on 25 April causing 8000 victims, injuring circa 18,000 and destroying hundreds of thousands of homes.