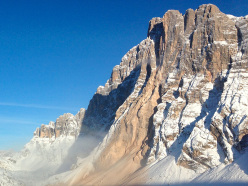 The collapse of Su Alto, Civetta, Dolomites that took place on 16 November 2013.
Photo by Dolomiti Emergency 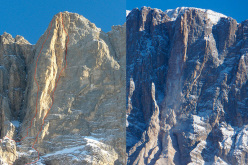 Th collapse of Su Alto, Civetta, Dolomites that occurred on 16 November 2013. In the photo on the left the lines of the two routes (Via Piussi left, via Livanos right), in the photo on the right the face after the collapse.
Photo by Alessandro Baù & Ilio De Biasio

Civetta, rock fall on Su Alto in the Dolomites

On 16 November 2013 a portion of the NW arête collapsed from Cima Su Alto in the Civetta group, Dolomites.

On Saturday 16 November at around 15:20 the Dolomites witnessed yet more serious rock fall, this time in the Civetta group, more precisely on the pedestal and NW arête of Cima Su Alto. Fortunately no one was on the face or beneath the mountain at the time of this massive rockfall and consequently no one was injured. The photos taken immediately after the event from the Dolomiti Emergency helicopter are certainly impressive and the collapse involved a section of the face that included important chapters of rock climbing in the Dolomites, such as the routes Piussi and Livanos. For this reason we asked Alexander Baù, an expert of this peak, to provide some more information.

In late August I spent three days on Su Alto with the portaledge to repeat and document some of the routes on the face and equip (with pegs) an abseil to facilitate the descent so as to avoid the long return through Val dei Cantoni: all for nothing, seeing that there won't be much climbing on Su Alto for a while.

In fact, on Saturday 16 November the northwest arête collapsed, perhaps a hundred or so metres from the top, taking with it some of the historic routes on this face: via Piussi practically no longer exists while the lower section of the Livanos route has been eliminated. In addition, the the final section of the pedestal which is usually used to reach the starts of the other routes located to the right of the Livanos route, namely the routes Terapia D’Urto Al Guanaco, Maffei - Leoni, Ratti - Vitali, has been seriously affected by this rockfall. By the looks of things, the first pitches of Terapia D’Urto Al Guanaco and the original start to the Maffei Leoni route have been hit, too.

Su Alto had inspired many of Italy's greatest climbers: Cassin, Soldà, Conforto, Comici It was Ratti who, finally in 1938, first breached this face. Since then, the "Grande Diedro", the great corner automatically became THE problem to solve; between 10 and 12 September 1951 Georges Livanos and Robert Gabriel made a dream come true with just a 30m rope, a wooden peg, aiders, a fair few pegs and "a great theory of free climbing, which then became somewhat questionable in steep overhangs" according to A. Bernardi in his book Grande Civetta. In the years that followed the corner was attempted by a host of flurry of great climbers: Oggioni and Aiazzi made the first repeat in 1952, Sorgato, Ronchi and Redaelli carried out the first winter ascent on 1962, while Massarotto and Claudio Moretto made the first solo and first winter solo ascents respectively. Nowadays the Livanos route was one of the few climbs on Su Alto that was repeated.

The NW arête happened to be the Ignazio Piussi's last great Civetta climbs; a first attempt made in 1966 with Roberto Sorgato and the Scotsman Robertson fortunately ended two hours before a gendarme collapsed and swept with it the entire starting gully. Not to be outdone, Piussi returned with Aldo Anghileri, Alziro Molin, Ernesto Panzeri and Guerrino Carboni and completed the ascent from 15 - 18 August 1967.

Having seen for myself how poor the rock quality is and the state of the old pegs, I truly believe that Giorgio Anghileri achieved something truly outstanding when, on 14 August 1991, he made the first solo ascent of this route. Awesome!

I think the only way to reach the routes that haven't been affected by the collapse (Maffei - Leoni and Ratti Vitali) is via the Ratti Vitali pedestal but, not knowing it, I don't want to add anything.

Sorry than another piece of the Dolomites has left us, but happy to not have been on the face!