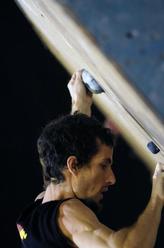 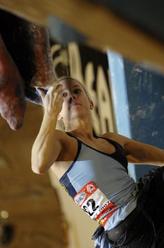 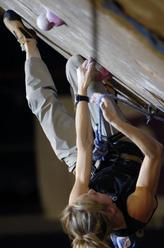 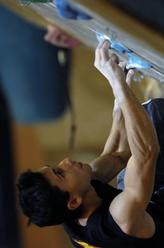 The seventh stage of the World Cup Lead was held in Valence (Fra) last weekend and was won by Patxi Usobiaga from Spain and Maja Vidmar from Slovenia.

It was going to be a fight to the last hold and this is exactly how things turned out in this penultimate stage of the World Cup Lead. In this game of catching up and changing leaders, this time Patxi Usobiaga and Maja Vidmar (for the fifth time running) got the better of Ramón Julian Puigblanque and Angela Eiter, while Natalija Gros and Jorg Verhoeven placed third.

Valence confirmed that the Difficulty competitions are increasingly, how can one put it, touch and go... like bouldering comps?. How else can one interpret the nth competition in which the results are decided in the space of a hold or two? The "format" here in Valence too is always the same: a large number of joint equals qualify for the final. The first round is festooned with tops (18 out of 26 in the men's comp and 22 out of 26 in the women's). Photocopy performance in the semi, in which 14 men topped out, leaving 13 (instead of the regular 8) to qualify for the final as Daniel Winkler was excluded, "penalised" for not having topped out in the first round. In the women's competition a "mere" 5 tops were achieved by the likes of Vidmar, Eiter, Gros and Irati Anda, while Sarkany, Franko, Ciavaldini, Markovic and Kobayashi qualified too.

As was to be expected the dice were thrown in the final (a much, much harder route) which saw no tops at all. Usobiaga and Puigblanque battled it out in an emotional duel, won this time by Usobiaga who climbed just one hold higher. With his first World Cup win this season the Basque climber also leads the provisional WC field.

The women's competition followed a similar storybook, with Maja Vidmar unbeatable in Valence. The Slovenian beat reigning World Champion Angela Eiter for the 5th time running in this World Cup, but only by a hair's breadth: Maja managed to move off the monodigt, while Angela only held it. This "nothing" netted Maja her 5th consecutive win and, above all, the leadership in the World Cup. Third place went to teammate Natalja Gros, while Muriel Sarkany from Belgium lived up to her class reputation finishing fourth overall.

The focus now shifts to the final competition in Kranj. Undoubtedly on 17 and 18 November those to look out for will be Puigblanque vs Usobiaga, Vidmar vs Eiter. The name of the game will be: don't lose, since everything can still happen and the only way to win the Cup is to reach the top hold in the final. Third place is still up for grabs between Verhoeven, Crespi and Mrazek (absent in Valence), while Sarkany should get bronze by beating Gros and Markovic. But beware: nothing can be taken for granted in this champion 2007 season. No mistakes permitted. Just like in Bouldering?