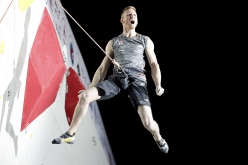 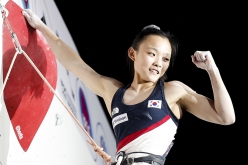 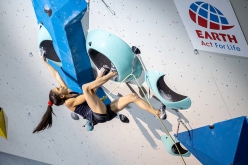 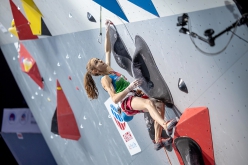 Paris 2012. Innsbruck 2018. And now Moscow 2021. Yesterday in Russia's capital Jakob Schubert forever etched his name among the greatest of this sport by winning the Lead World Champion title for the third time in his illustrious career - on a par with legends François Legrand and Adam Ondra. In the past, only Angela Eiter has managed to do one better, winning a record-breaking four Lead World Championships.

In a competition full of twists and turns, Yoshiyuki Ogata immediately set the bar high, and was followed a few moments later by Tomoa Narasaki who easily dispatched with the dyno at the start before launching upwards with immense power and precision only to fall two holds higher than his teammate, just one move short of the top. Unfortunately Italy's Stefano Ghisolfi never really got in sync with the route and fell 10 holds lower, while Germany's Sebastian Halenke, flamboyant as ever, delighted the spectators by finding a no-hands rest before traversing across the final micro crimps. With time running out he fell just like Ogata, while Martin Stranik from the Czech Republic drew on all his inordinate power and experience to reach the same hold as Narasaki. At this point the top seemed elusive but Slovenia pulled the ace out of its sleeve in the form of Luka Potocar who, climbing with a level of confidence unheard of for someone just 19 years old, powered to the top, placing his foot high to ensure the dyno to the last hold was successful. Back in isolation Jakob Schubert surely heard the crowed erupt with joy and the Austrian knew he couldn't afford the slightest mistake. A few hours earlier, in the semifinals, he had fallen and had furiously reprimanded himself that he'd forgotten how to fight, but in the final he once again transformed into the devastating climbing machine he's famous for, climbing to the top with the very same determination that had earned him the bronze medal at the Tokyo 2020 Olympics. Only this comps revelation was now left, Britain's Hamish McArthur and the only athlete to have reached the top in the semifinal. The 19-year-old powered upwards without any hesitation whatsoever, just before the final crimpy traverse he even managed to rest and recuperate, but all of sudden that last move to the top proved fatal. Bronze for him and a result, despite his disappointment, that he can be extremely proud of. Doubly so as this was his first senior final!

The women's comp proved equally exciting. Dinara Fakhritdinova delighted the home crowd with a strong performance, but this was easily beaten by American prodigy Brooke Raboutou, while France's Salomé Romain was unable to reproduce her astounding semifinal form and fell much lower than all the rest. Japan's Natsuki Tanii also found herself struggling against this ruthless mix of small crimps and burley moves, and the first to indicate that the route was feasible was Jessica Pilz, 2018 World Champion and capable of climbing one hold higher than Raboutou. The next athlete out, recently crowned Boulder World Champion Natalia Grossman, once again demonstrated her innate class by powering gracefully up to hold #37. Just to give an idea of how good she really is: word has it that on a simulation route in Innsbruck a few weeks back she fell off the same hold as Schubert... How about that for food for thought! Here in Moscow though the athlete who fell off the very same hold as Grossman was Italy's Laura Rogora, after a battle that can only be described as absoutely epic. The two were perfectly equal even on countback to the semifinal, and were therefore split on time: with 4:22 Grossman won silver , while Rogora's 5:01 earned her bronze. And what about gold? This went to an immense Chaehyun Seo, winner of the Lead World Cup 2019 and now Lead World Champion with an utterly convincing top. The only top in the women's comp that gifted the excellent Russian games with a fairy-tale finish. Maybe it's true that the 17-year-old had to battle through the physical lower section, but as she herself admitted, the top slab was a piece of cake. Impressive stuff.

18.09.2012
World Climbing Championships 2012, all the results from Paris.
The 12th World Climbing Championship took place in Paris last week. Lead was won by the Austrians Jakob Schubert and - for a record breaking fourth time - Angela Eiter. Boulder was won by Mélanie Sandoz from France and - for the third time - Dmitry Sharafudtinov from Russia. Yuliya Levochkina from Russia won the Speed event and her counterpart Qixin Zhong from China was crowned World Champion for the fourth time in a row. The full report by Franz Schiassi.