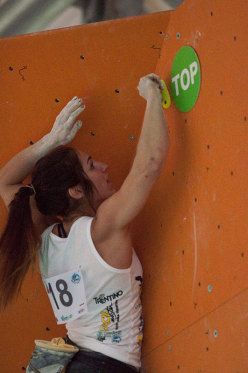 Rock Master: Puccio and Gelmanov win the Boulder, McColl and Fakhritdinova the Duel

Sunday 8 September 2013. During the last day of Rock Master Festival 2013 the Boulder competition was won by Russia's Rustam Gelmanov and, for the second year running, America's Alex Puccio. Sean McColl from Canada and Dinara Fakhritdinova from Russia won the Duel challenge. Stefano Ghisolfi from Italy placed second in the Duel.

Fakhritdinova and McColl win the Lead Duel
A great Duel just took place at the Climbing Stadium: Dinara Fakhritdinova and Sean McColl won, beating Katharina Posch and an extraordinary Stefano Ghisolfi who climbed superbly to only just miss out on winning.
- Read the complete report