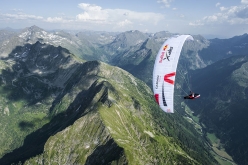 During the Red Bull X-Alps 2015
Photo by Felix Woelk 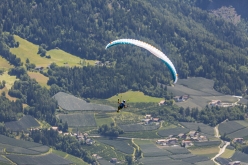 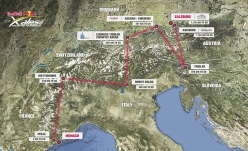 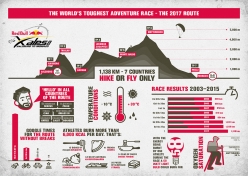 In 2 days time, on Sunday 2 July, the eighth edition of Red Bull X-Alps will start. 31 athletes will compete in this extenuating and incredible traverse across the Alps, by paraglider or on foot, from Salzburg to the Principality of Monaco.

So this is it. On July 2nd, i.e. this Sunday, the Red Bull X-Alps 2017 will get underway once again. A unique competition that from Salzburg literally traverses across the Alps, by paragliding or walking (actually, mostly running) and finishes after 1138 km and 7 turnpoint on a small raft in the sea at Montecarlo.

31 superb athletes from 20 different nations will take part in this challenge that, for the eighth time running, takes place once every two years. The competitors are the best of the best. Absolute champions. All are extraordinary pilots, all have an enormous experience, all can bank on physical and mental endurance which is absolutely out of the ordinary. The race record of 8 days, 4 hours and 37 minutes,set in 2015 by 4 times race winner Christian Maurer from Switzerland already speaks for himself.

It’s against Maurer and this amazing record that everyone will have battle. And of course against the course and the unknown weather that will be "discovered" day by day, forcing the athletes to adapt flight plance and race tactics. Yes, tactics and the ground support team and competition experience are all vitally important. This is why one of the hot favourites is the Italian Aaron Durogati, two times winner of the Paragliding World Cup and who will now take part in his third X-Alps (6th and 7th place).

Among the favorites there are also Germany’s Sebastian Huber (2nd in 2015) and Austria’s Paul Guschlbauer (3rd in 2015). It’s worth noting that this year one of the 7 Turnpoints (that include mountains such as Triglav and the Matterhorn) is Monte Baldo, overlooking the Veronese shores of Lake Garda.

Yesterday the Leatherman Prologue was won by Durogati, Huber and Benoit Outters, who consequently all received a "LedLenser Night Pass" bonus, which allows them once to skip the mandatory night stop time and continue walking through the dark.