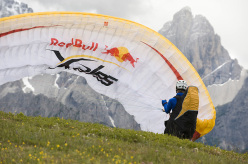 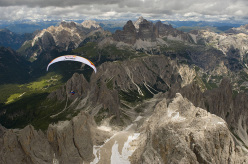 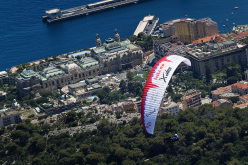 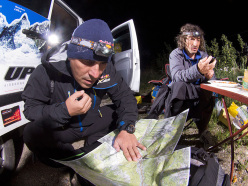 On 7 July the Red Bull X-Alps 2013 gets underway, the immensely difficult race on foot or by paraglider from Salzburg in Austria to the Principality of Monaco. 32 athletes from 21 countries will take part, including three Italians: Aaron Durogati, Peter Gebhard and Andy Frötscher.

It is undoubtedly one of the most difficult, devastating and fascinating races in the world. It crossed the entire Alps, past all the most beautiful peaks in this immense mountain range. When things go well and the winds are favorable, they'll soar up high, paraglide. But when the weather "throws it at them" they'll continue down below, on foot possibly running. All the way from Salzburg in Austria to a small landing float in the sea at the Principality of Monaco, past some of the most famous mountains in the world. Over 1,000 km as the crow flies... We're obviously talking about Red Bull X-Alps, the competition that takes place every two years, reserved to the world's best only.

It has to said right from the outset that 2013, in terms of spectacularity and commitment, promises well and compared to the previous edition, the 32 athletes will have to race almost 200 km further. After you start they will head to the Dachstein massif, then turn decidedly west to reach Wildkogel and subsequently Zugspitze, the highest mountain in Germany. At this point the athletes calibrate the compass south to cross Austria and reach Italy's Ortler. At this point the race isn't even at its halfway stage and if things were tough up to here, they're about to get even tougher: the race now makes its great traverse east towards Switzerland.

After Interlaken the gliders reach an obligatory, unmissable stage, their "fly-by" past the Matterhorn. The panorama here is spectacular, unforgettable, high above the famous "Gran Becca". And the next stage, Mont Blanc, is certainly just as charming and scenic. Although the finishing line isn't in sight from the top of Europe, at this point the hardest sections have been done and now it's all about resisting, with the remaining strength (if any still remains). Which means entering French territory and flying south towards the sea and the small landing float in the sea that marks the end to this extraordinary, long and difficult journey. When the first competitor lands at Monaco the countdown begins: all others have a further 48 hours to reach the finish. Few succeed...

Needless to say, the competitors must be great pilots and also outstanding athletes: in the past editions some have walked and run up to 100km per day. They will be helped by small teams - up to a maximum of two people - that can offer only a minimal logistical support (preparing meals and offering psychological assistance). As in previous editions the athletes will be allowed to compete from 05:00 to 22:30, and in 2013 there is an interesting novelty: the "Night Pass." Each athlete can continue walking through the night, when and where they choose, but only once... It's clear therefore that great ability will be needed to interpret the winds, as well as an immense desire to suffer, walk and run when needed, combined with shrewd tactics!

This year there are 32 athletes from 21 countries, including three Italians, young Aaron Durogati and Peter Gebhard and expert Andy Frötscher who has competed in all X-Alps editions. For the record, 2011 and 2009 was won by Christian Maurer. In 2011, the Swiss champion needed a mere 11 days, 4 hours and 22 minutes to complete the traverse! On July 7 he will definitely be the man to beat.

AARON DUROGATI - TEAM ITA1
At 26 years of age, Aaron Durogati might well be one of the youngest athletes in this event, but one must remember that started very early, when he was only 6! His first flight was on a tandem paraglider, but he knew right from that moment that his dream was to fly. At 15 he gained some formidable flight credentials, competing with the Italian team and winning several podium places. In winter he is a ski instructor and an keen ski tourer; these skills will prove invaluable when, in the mountains, he will have to rely on his abilities only.

PETER GEBHARD - TEAM ITA2
Peter Gebhard is lucky to be alive. In 2008 he had a bad flying accident; forced to make rescue flight, he landed badly and broke two vertebrae. But Peter is extremely determined and he returned the following year, competing in the World Cup in Korea and finishing 7th. Since then he has continued to represent Italy. In July 2012 he set a record 277km flight of in just 9.5 hours through Austria and the Italian Alps. This will be his first Red Bull X-Alps.

ANDY FRÖTSCHER - TEAM ITA3
Having taken past in every competition since the first edition in 2003, Andy Frötscher has become a sort of Red Bull X-Alps legend. Over the years the veteran Italian athlete has accumulated a wealth of experience which, with a little bit of luck, he will convert into victory. Frötscher's best result was in 2005 when he placed 10th, and this year the 43-year old athlete will do his very best to take advantage of his in-depth knowledge of the course and the competition by heading straight to the finishing line at Monaco.


Watch the even unfold live on www.redbullxalps.com.

Further information and articles on: www.redbull.com