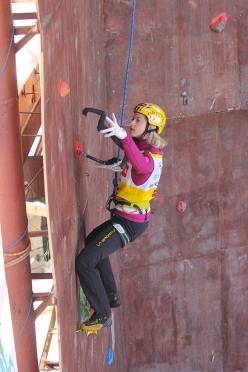 Angelika Rainer competing during the last stage of the 2014 Ice Climbing World Cup at Ufa, Russia
Photo by Marco Servalli 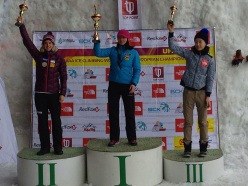 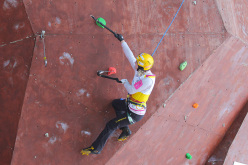 Angelika Rainer competing during the last stage of the 2014 Ice Climbing World Cup at Ufa, Russia
Photo by Marco Servalli

Russia's Maxim Tomilov and Maria Tolokonina won the final stage of the Ice Climbing World Cup 2014 at Ufa in Russia last weekend. In doing so, they won both the European Championship and the overall World Cup. Silver went to Angelika Rainer and Park Heeyong, bronze to Shin WoonSeon and Alexey Tomilov. The Speed Climbing World Cup 2014 was won by Nikolay Kuzovlev and Maryam Filippova.

The last stage of this season's Ice Climbing World Cup also acted as the European Championship and the event was won on Sunday 2 March by the home athletes Maxim Tomilov and Maria Tolokonina who also won the overall World Cup. Angelika Rainer from Italy placed fifth and this sufficed for an excellent second place overall that, after a successful season outdoors, does justice to all her hard work and training. "I'm truly happy with this second place" commented Rainer "after Helmcken Falls and the other mixed routes it wasn't easy to keep in shape for competitions, but I succeeded and I'd therefore like to thank all my friends and also Grivel for the excellent support." Third place overall went to Korean talent Shin WoonSeon despite her seventh place in Ufa. The stage was won by Maria Tolokonina, followed by her teammates Maryam Filippova and Nadezhda Gallyamova.

The men's competition was dominated by the Tomilov brothers, by Maxim who placed first and Alexey who placed second, ahead of Korea's Park Heeyong. In doing so Maxim Tomilov won the overall World Cup, while his brother took bronze; silver went to the Korean who could do little to beat the two battling brothers.

The Speed event was won by the Russians Ekaterina Feoktistova and Ivan Spitsyn, while the overall World Cup was won by Nikolay Kuzovlev and Maryam Filippova.

For the first time ever the Ice Climbing circuit visited Ufa, an extremely cold city circa 1500km to the east of Moscow. The athletes were welcomed by a rather particular structure, not the usual Lead wall but a Boulder wall, completely "total dry" despite the temperatures being constantly below zero. The Russian route setters created a series of problems, nothing explosive like in bouldering, but a series of technical moves one after the next, along 20+ move routes. Unfortunately the format didn't go down too well with the non-local climbers and the Russians won the sweepstakes, placing athletes on all podium positions bar Park's third place.

Congratulations to these athletes and the Russian federation that invests in facilities and national competitions that would certainly be appreciated elsewhere, too. Unfortunately finding the economic resources to build new walls and create national squads is by no means easy. Currently the only two ice structures that can host international competitions and that are open to the public are those at Rabenstein in Italy and Champagny in France, albeit unfortunately only for a couple of weeks a year. Hopes are high that, just like in sports climbing, the future of ice climbing competitions is bright and that many more climbers will attracted to this sport and climb in both competitions and on ice falls, so that greater investments will be made to create more artificial ice climbing walls.