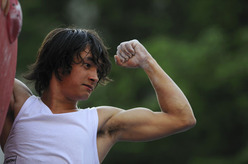 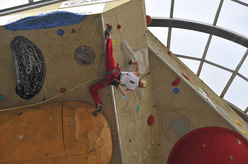 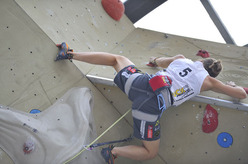 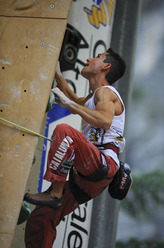 The fourth stage of the Lead World Cup 2008 took place in Imst, Austria on 20/09/08 and was won by David Lama and Mina Markovic

It seems as if the 2008 competition season is the one for photo finishes. Just like in Bern last week, the fourth stage in Imst was decided by holds touched or held and both the men's and women's final came to the wire in the space of a couple of centimeters and was eventually won by Mina Markovic and David Lama.
The 20 year old from Slovenia won her first ever World Cup by beating the great home favorite, 15 year old Johanna Ernst (seeing that Angela Eiter was absent due to injury. After celebrating her comeback in style by winning in Bern, teammate Maja Vidmar had to make do with 3rd overall when she fell from the penultimate hold.
David Lama on the other-hand, finally free from chasing Kilian Fischhuber in the Bouldering World Cup, won the first Lead competition he decided to take part in this season thanks to a dyno for a hold which Ramon Julian Puigblanque didn't even attempt. The Canadian and North American Champion Sean Mccoll fell a few moves lower and produced his best ever World Cup performance to finish third overall,  a hair's breadth away from Dutchman Jorg Verhoeven, while Cedric Lachat and Tomas Mrazek placed 5th equal after finishing on the same hold which young Austrian hope Jakob Schubert had only managed to touch.
Jorg Verhoeven currently leads the 2008 ranking with 275 points, a mere 4 points ahead of Tomas Mrazek from the Czech Republic, while Anma is third and Puigblanque 4th. Usobiaga, who placed a disastrous 22nd in Imst, trails the leader by 85 points and although mathematically all is still up for grabs, there is absolutely no room for error in these final phases. The same obviously holds true for the women's event, even-though it seems difficult to imagine how Johanna Ernst could lose her world domination, at a mere 15 years of age!
The next stage of the Lead World Cup will take place in Puurs, Belgium on 26 and 27 September, a fortnight before the European Championships scheduled for 15 - 18 October in Paris...