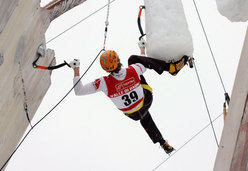 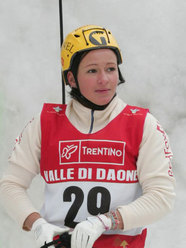 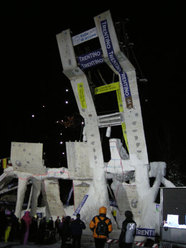 On 18/01/09 Markus Bendler from Austria and Maria Tolokonina from Russia won the 8th Ice Master in Valle di Daone, valid as the first stage of the Difficulty Ice Climbing World Cup 2009. Maria Tolokonina also won the Speed event together with teammate Pavel Gulyaev.

A superb Bendler and a fantastic Tolokonina took home the sweepstakes in last weekend's Difficulty competition in Valle di Daone, Italy. The 22 year old Russian athlete demonstrated her supremacy by also winning the Speed event, along with teammate Pavel Gulyaev. But the competition wasn't dominated by these three only, there was another main actor in this first stage of the Ice World Cup. or rather, a "technical" protagonist was "absent": for the first time ever the athletes competed using crampons without spurs. Power and stamina combined with maximum speed of movement were the name of the game on this year's beautiful, technical and extremely difficult ice structure.

It came as no surprise that the most popular move was the figure of four, or so-called Yaniro; this contortionist move with leg wrapped high over arm and planted ice axe enabled the athletes to take body weight off the arms. This move was repeated again and again in a sort of ballet which need not only power but also synchronisation and getting used to. A sort of dance. One thing was clear from the outset: not everyone was ready for this innovation, and things didn't turn out as expected.

The men's qualification indicated clearly what lay in store. The routes was demanding and left no room for error, and the first to fall victim were the Italians: neither Mauro Bubo Bole, nor Herbert Klammer nor Mario Prinoth managed to qualify to the next round. They weren't the only ones, seing that other calibre athletes such as Maxim Tomilov and Andreas Steindl failed, too. Those who had no trouble at all (topping out in their heats) were Markus Bendler from Austria, Simon Anthamatten Jack Müller from Switzerland, Mikhail Melnikov from Russia, Park Hee Yong from Korea, Evgeny Kryvosheytsev from the Ukraine and Manuel Cordova from Spain.

In the beautiful Semifanl Bendler produced his true masterpiece, topping out on both routes. No other athlete managed to repeat this magic trick and it indicated clearly who stood a good chance of winning in the final. As predicted, the Austrian repeated his exploit in the fairytale final, topping out on both final routes and winning with an incredible full 5 tops in 5 routes.

Bendler undoubtedly dominated in Daone and in doing so he enjoyed the satisfaction of not only doubling his Daone takings (after winning in 2007), but also of convincingly beating Simon Anthamatten, who beat Bendler by the closest of margins to win the overal World Cup in 2008. The Swissman placed 8th overall in Daone, the last of the finalists, and he was beaten by Park Hee Yonf from Korea (7th), Jack Muller from Switzerland (6th), Alexey Tomilov from Russia (5th) and the Spanish revelation Manuel Cordova (4th). Bendler was joined on the podium by Swissmen Patrik Aufdenblatten and Samuel Anthamatten, silver and bronze respectively

If Bendler illuminated the men's competition, then the women's was blinded by star Maria Tolokonina. The 22 year old Russian athlete presented herself with a silver medal won last year and 5 years of Ice maseter competition experience. But despite this curriculum, no one could have imagined such a triumph. Just like Bendler, Tolokonina didn't make a single mistake and topped out on all three competition routes including, importantly, the second final route. With 8 athletes in with a chance of gold, only Tolokonina held her nerves and topped out, climbing like a true champion!

Stephanie Maureau from France finished second, ahead of Lucie Hrozova from the Czech Republic. Last year's winner Petra Muller placed 4th, just ahead of Cholé Graftiaux from Belgium. The Italians Barbara Zwerger and Angelika Rainer climbed well to place 6th and 7th respectively, in the running until the final route just like the others. Unlike Jenny Lavarda: the winner of the Ice World Cup 2007 and 2008 had one of those off days and had to make do with 11th overall, the last in the final. Anna Torretta, one of the most representative athletes in the competition circuit, suffered a similar fate and failed to pass the qualification round.

But nothing is ever definitive. Proof of this came from Anna Torretta who redeemed herself by winning bronze in the spectacular Speed competition. Once again gold was won by Maria Tolokonina, ahead of Stephanie Maureau. Fastest in the men's event was Pavel Gulyaev from Russia, ahead of teammates Igor Fayzullin and Maxim Tomilov.

The next stage of the Ice Climbing World Cup 2009 is scheduled for Saas Fee in Switzerland on 22 and 23 January. We'll see if the Swiss team, playing at home, will manage to dethrone Bendler and Tolokonina. One thing is certain: this new game (without spurs) needs time to settle down and it may well hold some surprises in store...