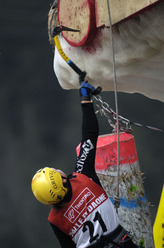 On 20/01/08 Simon Anthamatten and Petra Müller from Switzerland won the first stage of the Ice Climbing World Cup 2008 in Valle di Daone. Jenny Lavarda from Italy and Markus Bendler from Austria placed second.

The competition went right to the wire and Simon lived up to his crazy ice goblin reputation by wining gold after an impressive comeback on the second route in the final. Just when all seemed lost he pulled out all the stops, producing a champion-like performance to reach the penultimate hold on the route (the only athlete to do so) which secured him his first ever Ice Master victory.

Top favourite Markus Bendler from Austria slipped into second overall as the advantage gained by his top on the first route was "devaluated" by the fact that both Herbert Klammer from Italy and Andreas Steindl from Switzerland both managed to equal Bendler's performance. The result? Since the points for each single hold are divided up between the number of athletes who reach it, Anthamaten's solitary top was worth its weight in gold while Bendler, to some surprise, finished a hold lower than Simon and had to make do with second place.

The same principle held true for Andreas Steindl who placed a "mere" third after gaining maximum points on the first route before producing a somewhat disappointing second round. Italian hope Herbert Klammer, still suffering from a fever which had struck him on the eve of the competition, climbed even more disappointingly on the second route and tumbled to 7th overall.

Those who performed better were Patrick Aufdenblatten, another member of the Swiss squad, and the Russian brothers Alexey and Maxim Tomilov. The magnificent 8 finalists were completed by Korean Park Hee Yong, without a doubt the greatest revelation in this Daone final.

If the men's competition was exciting, then it would be true to say that the women's comp offered a duel right down to the last hold which was worthy of all great finals. Jenny Lavarda and Petra Müller battled it out to the last, gaining hold after hold. The two were perfectly matched after the Semifinal (two tops each) and after the first final route they remained inseparable. The second and final route was to prove a decisive duel.

In the end the extremely strong Swiss athlete left no margin for error, reaching the final top which the Italian athlete failed to get to. To stand a chance of winning Lavarda would have had to reach the top but, perhaps due to the pressure, she failed just a touch lower down. One thing is certain: this duel will be the Leitmotif of this Ice World Cup. Third place went to this year's new entry Maria Tolokonina from Russia, ahead of Felicitas Feller from Switzerland. Anna Torretta from Italy placed fourth, ahead of Natalya Kulikova from Russia and the two remaining Italian finalists, Angelica Rainer and Barbara Zwerger.