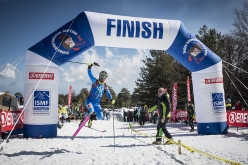 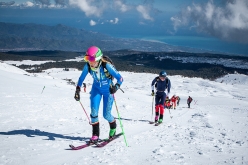 Individual Race of the European Ski Mountaineering Championships on the South Face of Etna, Sicily
Photo by Areaphoto 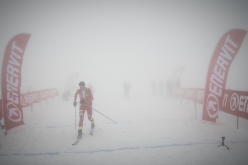 Kilian Jornet Burgada wins the Vertical Race of the European Ski Mountaineering Championships on the South Face of Etna, Sicily
Photo by Areaphoto 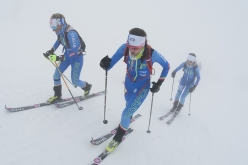 During the Vertical Race of the European Ski Mountaineering Championships on the South Face of Etna, Sicily
Photo by Areaphoto

Strong gusts of wind and rain storm forced the Etna European Championships Organising Committee and the ISMF staff to take the tough decision to cancel the Vertical race scheduled for Friday morning at Piano Provenzana. Weather conditions improved on Saturday for the Individual race to take place as planned however.

Straight after the start a small group of men made up of Spain’s Kilian Jornet Burgada, the two Italians Michele Boscacci and Robert Antonioli and Switzerland’s Martin Anthamatten took the lead and distanced itself from the rest of the field. The following ascent was an exciting struggle between Kilian Jornet Burgada, Boscacci and Antonioli. Throughout the rest of the race this situation didn’t change, with these three men leading the race and no one managing to take a significant lead. It was the last change which decided the fate of this Individual race: Kilian Jornet started with a few seconds head-start, but the Italians began the ascent with only one goal: to catch the Spaniard. Robert Antonioli made the most of his downhill skills and overtook Kilian Jornet Burgada. Antonioli literally flew down the descent and crossed the finish line with a time of 1 hour 10 minutes and 22 seconds’. Behind him Michele Boscacci and Kilian Jornet Burgada fought for second place and it was the Italian who eventually came up trumps. Davide Magnini (ITA) and Damiano Lenzi (ITA) placed fourth and fifth respectively.

The women’s competition was led from the outset by France’s Axelle Mollaret, followed by Laetitia Roux (FRA) and Emelie Forsberg (SWE). Mollaret battled hard to take the continental title, crossing the finish line with a time of 1:05:18. Her teammate Laetitia Roux won silver, while bronze was won by Sweden’s Emelie Forsberg.

The track of this Individual race hosted on the Rifugio Monte Conca’s pistes guaranteed to all spectators to see, follow and cheer athletes in different phases.

Vertical Race
Fridays’ Vertical race, cancelled due to strong winds and a hailstorm, was retrieved on Sunday in Nicolosi on the southern slopes of Mt. Etna volcano, the highest active volcano in Europe. Athletes competed in a 550m positive difference on a track close to Rifugio Sapienza. Weather conditions put a strain on the Local Organisers Committee, in fact Sunday’s competition was dominated by 20 cm of fresh snow and visibility was far from optimal.

Champion Kilian Jornet Burgada dictated the rhythm of entire race. Immediately after the start the Italian Nadir Maguet took the lead, but he was soon overtaken by the Spaniard, who gained precious metres. Behind him there were Davide Magnini (ITA), Werner Marti (SUI), Robert Antonioli (ITA) and Antonio Alcalde Sanchez (ESP). Burgada kept a good rhythm, even if young Magnini kept close on his heels. Burgada appeared from the mist and sped directly into first place, crossing the finish line with a time of 23’34’’. Davide Magnini (ITA) placed second just four seconds later, while Antonio Alcalde Sanchez (ESP) placed third. Fourth and fifth places went to Robert Antonioli and to Werner Marti.

The women’s race was dominated once again by Axelle Mollaret who won gold with a time of 25’54’’, ahead of Switzerland’s Victoria Kreutzer and Italy’s Alba De Silvestro, who crossed the finish line after 27’15’’. Fourth and the fifth places went to Katia Tomatis (ITA) and Claudia Galicia Cotrina (ESP).

The winner of the Junior men category was Pau Coll Turra (ESP) with a time of 23’21’’, while Sebastien Guichardaz (ITA) and Andrea Prandi (ITA) placed second and third respectively. In the Junior women’s race it was extraordinary Ekaterina Osichkina (RUS) who took gold, ahead of Giulia Murada (ITA) and Mallaurie Mattana (FRA).

The ISMF will be back soon on 7th and 8th April with the World Cup competitions hosted at Madonna di Campiglio, Italy.