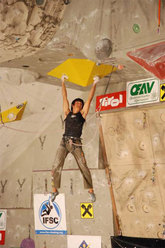 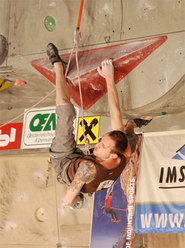 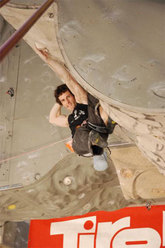 On 12/05/07 David Lama and Angela Eiter won the first stage of the Climbing Worldcup Lead 2007 held in Imst, Austria.

It’s off: after the Speed and Bouldering disciplines, the 2007 World Cup Lead kicked off in Imst, Austria, last weekend. And the start proved relatively smooth, seeing that the main players are still the same as last year: emperor Angela Eiter (World Champion and winner of the last 3 World Cups) and emperor in-the-making David Lama who, in his senior debut, won the European Lead and Bouldering Championships and placed second overall in the World Cup Lead 2006. Two Austrians lead the provisional ranking therefore and surely this means something special – at least that the “Austrian School” is worth examining closely, especially in the light of the champion’s age (Eiter is 21, Lama 16) and the fact that they seem destined to leave their mark on the world competition scene for a while to come.

Lama beat a set of kings to win the event: gladiator Tomasz Mrazek from the Czech Republic placed second, last year’s winner Patxi Usobiaga from Spain placed third while Jorg Verhoeven from Holland placed fifth after placing joint equal with Lama in both the Open and Semi-final. In the women’s event Muriel Sarkany from Belgium made her first serious reappearance; after having been dethroned by none other than Eiter three years ago, the 32 year old queen of climbing is now back in full fighting form, confirming her immense class. Another young Austrian hopeful, 19 year old Katharina Saurwein from Austria showed her talent to place third.

The small fearless and fearsome climber David Lama won the competition outright: one of the four qualification tops was his (along with Mrazek, Verhoeven and Puigblanque), one of the two Semifinal tops was his (along with Verhoeven) and in the final sprint he got close to the top, climbing meters higher than second-placed Mrazek. All the rest simply had to make do: Mrazek won silver, ahead of Usobiaga’s great final flurry. Cedric Lachat from Switwerland placed 4th, Jorg Verhoeven 5th (after placing joint-equal to Lama in the Semis), Asian Champion Sachi Anma placed 6th, Eduard Marin Garcia 7th and teammate RamÃ³n Julian Puigblanque 8th. Legendary Yuji Hirayama welcomed his return to competitions with a fantastic 9th place – although first excluded from the final he demonstrated true timeless class… and what’s more is that the 38 year old Japanese seems to want to take part in the entire circuit!

Angela Eiter dominated the women’s event with a top in the Qualification, the only top in the Semifinal and the highest point reached in the Final. Muriel Sarkany returned to world-class form as mentioned previously to take silver, while Saurwein’s bronze is worth its weight in gold. Alexandra Eyer from Switzerland celebrated her form with an excellent 4th place, beating Italian Jenny Lavarda who, after qualifying only 19th, produced outstanding results to finish 5th. A quick glance at the final list shows just how impressive this result is: sixth place went to another world class athlete, Sandrine Levet from France.

So the World Cup Lead 2007 has now kicked off and is in full swing. It promises to be a long season with another seven stages and, seeing how things have started, pacemakers Lama and Eiter will probably be the ones to beat. The men’s event in particular will prove difficult, with at least other 6 super climbers vying for the title (Mrazek, Verhoeven, Usobiaga, Puigblanque, Lachat and Crespi) and capable of beating the Austro-Nepalese phenomenon David Lama.