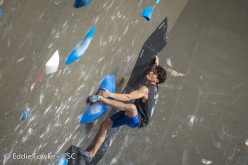 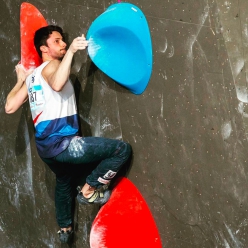 The Boulder World Cup 2019 started yesterday in Meiringen, Switzerland. The Semifinals and Finals take place today at 11:00 and 19:00 respectively and can be followed in in live streaming.

The Bouldering World Cup 2019 started yesterday beneath heavy spring snowfall in Meiringen, Switzerland and after the 8-month break the much-awaited new season finally brought the best of the world together under one roof. Expectations yesterday were sky-high, also because the best athletes after stages in Moscow, Chongqing, Wujiang, Munich and Vail will be able to compete in the qualifiers for the Olympic Games in Tokyo 2020, and so the tension was palpable.

Making a mistake is never a good thing and yesterday proved even more costly, since qualifying relied on sending all five problems. Only Stefano Ghisolfi sent four and qualified last in the group, but this is his first international bouldering comp in 4 years and he’s renowned for his immense Lead stamina. The round was dominated by America’s Nathaniel Coleman and Britain’s Nathan Phillips, while surprise exclusions from the top-20 cut included star athletes such as Jan Hoyer (21), Sean McColl (24) and, way down the line, Jakob Schubert (43).

In the women’s event Slovenia’s Janja Garnbret continued where she had left off last season, and is currently joint first with America’s Kyra Condie, having been the only climbers to send 5 and 5 problems in their respective heats. Disappointment for 2018 Lead World Champion Jessica Pilz who finished 21st and only just failed to make the cut.

The Semifinals and Finals take place today at 11:00 and 19:00 respectively and can be followed in in live streaming.