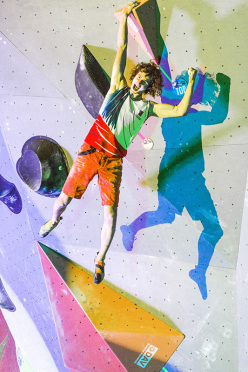 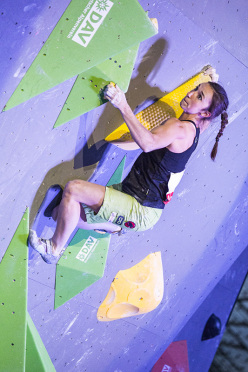 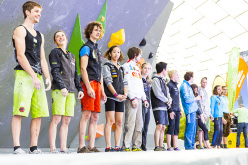 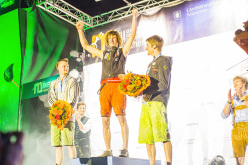 This evening in Munich, Germany, Adam Ondra and Juliane Wurm won the Bouldering World Championship 2014. Silver was won by Jernej Kruder and Alex Puccio, while bronze went to Jan Hojer and Akiyo Noguchi.

6000 people just witnessed a final which couldn’t have been more thrilling. In the end, right on the very last problem, it was won by Czech star Adam Ondra and Germany’s Juliane Wurm. They are the new Bouldering World Champions!

It would have been hard to write a more exciting script to the final of this Bouldering World Championship. After battling it out through the semifinals this morning, 12 athletes lined up for the showdown in Munich this evening. Twelve of the very best, who had managed to eliminate hot favourites such as Kilian Fischhuber, Sean McColl, Yulia Abramchuk and Mina Markovic to name just four who failed to make it past the Semifinal.

These six male and six female athletes were spearheaded by Germany's Juliane Wurm, her teammate Jan Hojer and Adam Ondra who had laid the groundwork in the Semis to qualify provisional first. The thought of a German double gold made the crowd go wild with excitement and right from the outset this teutonic proposition looked incredibly real: while Slovenia's Jernej Kruder, France's Guillaume Glairon Modet, Japan's Tsukuru Hori and Russia's Dmitrii Sharafutdinov all failed on the first problem, both Ondra and Hojer sent it first go to make their intentions felt. Hojer then took the lead by flashing problem #2, while Ondra lagged behind as he struggled with 8 attempts, far more than both Kruder and Glairon Modet who remained firmly in the game.

These two made surprisingly short work of problem #3, as did defending champion Sharafutdinov, and when Ondra took the stage he knew he had some serious catching up to do if he wanted to keep his dream alive of adding this title to his list of victories, which already includes the Lead World Cup and the Bouldering World Cup. But the third, vertical problem – a dyno off a tiny crimp for two poor slopers – proved a nightmare and it was only his sheer grit that eventually got him up it, fifth go. The same held true for Hojer minutes later, as he struggled and struggled and... struggled as the seconds ticked by. But the winner of the 2014 Bouldering World Cup is not a man to give up easily and with just 2 seconds left he finally unlocked the sequence to send it 10th go! This meant that Hojer had sent 3 problems in 12 attempts, while Ondra had sent 3 in 14. The Final was going right down to the wire....

While all eyes were on the battle between these two, Kruder almost stole the show by sending problem #4 on his fourth attempt. His pure power demonstration projected him into provisional first place and put Ondra and Hojer under immense pressure: if they wanted to win, they had to send the final problem. And send it Ondra did, second go! But it wasn't over yet, for Hojer was still to climb and he had a margin of 4 attempts, so victory was still well within his grasp. He knew it. And climbed calmly, despite the immense pressure, at exactly the same moment as his teammate Juliane Wurm clinched her first World Championship title. The timing couldn't have been better and for a second it looked as if the stars were aligned in Germany's favour. Double gold. Double gold... But it wasn't to be. Problem #4 got the better of Hojer and suddenly time ran out. Ondra was crowned champion and Hojer, who failed on the final hurdle, was pipped to the post by Kruder who had produced his best-ever competition performance to win silver.

Talking of best-ever competition performances... after countless second and third places over the years, Germany's Juliane Wurm finally found her way to victory half-way through the 2013 season. And despite winning only once in 2014, she has nevertheless always been a fearsome force to be reckoned with and her third time lucky this evening couldn't have been luckier: the Bouldering World Championship title is hers, and deservedly so! Wurm comfortably qualified for the final in provisional first and she was joined by the revelation of the competition, England's Michaela Tracy, her teammate Shauna Coxsey, France's Melissa Le Neve, Japan's Akiyo Noguchi and America's Alex Puccio.

While Le Neve, Coxsey and Tracy struggled on problem #1, Noguchi and Puccio flashed it and Wurm, not to be outdone, sent it second go. Problem #2 proved somewhat trickier for most, except for Puccio who sent it in two, compared to Wurm's flash. This meant that these two athletes were perfectly paired as they entered round 3, but since this problem proved invincible for all, problem #4 was going to be decisive. A running start rightwards was certainly quite a gamble for the route setters, but it payed off as Coxsey stuck the dyno on her fourth attempt and Puccio on her sixth. This really put pressure on Wurm and to win in front of her home crowd she simply had to send it, and in less than six attempts.

As the spotlight focused on her and her teammate Jan Hojer, the crowd didn't know who to watch, especially as 2 minutes were down and the pressure was building fast. Thankfully Hojer stopped to brush a hold and as all eyes shifted left Wurm stuck the dyno. Fifth go. The title was hers. Boundless joy and incredulity. Until the first congratulations, from Hojer. Followed by Puccio who won silver, and Noguchi who won bronze.