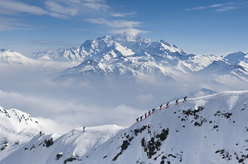 On the ridge of Grande Journée, opposite Mont Blanc
Photo by Jocelyn Chavy 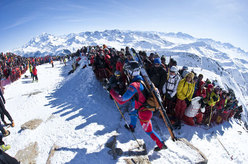 The finish on Grand Mont
Photo by Jocelyn Chavy 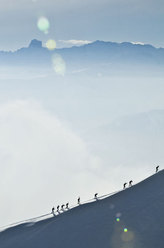 The four day ski mountaineering marathon in Arêches-Beaufort (France) was won by the Spanish-Swiss team comprised of Kilian Jornet Burgada and Florent Troillet. The women's event was won by the Italians Francesca Martinelli and Roberta Pedranzini.

The final result of the 25th Pierra Menta turned out to be just as expected: the men's competition was won by the two phenomena of the last competition seasons, Florent Troillet from Switzerland and Kilian Jornet Burgada from Spain - winner of two editions of the killer Ultra Trail Tour du Mont Blanc - while the women's competition was won by the evergreen Italian champions Francesca Martinelli and Roberta Pedranzini. If it is true that there was no great battle amongst the women - despite an Italian error which enabled Laetitia Roux and Mireja Mirò's to win the third stage on Grand Mont - the men's competition was far tougher than can be gleamed from the 6:39 minutes which separate the winners from second placed Frenchmen Florent Perrier and William Bonmardion and the 8 minutes which separate the super winners from the first Italian teams, Manfred Reichegger - Denis Brunod (third) and Damiano Lenzi – Lorenzo Holzknecht (fourth).

The last stage went to these final two athletes and they would certainly have deserved a podium position (it's a shame that there are only three! :-) if only for the way they managed to interpret these four days: always on the attack, like true gladiators. Not even their generous performance during the ultimate stage helped them upturn the final result, and I'm certain they feel that 4th place is somewhat undeserved. There's no point concentrating on the little-big quarrel in the Italian squad which, due a 30 second penalty given then cancelled from Reichegger and Brunod, would have changed the result seeing that the two were only a handful of seconds faster than Lenzi and Holzknecht. What remains though of this "grande course" are always the important things, those which etch their way into the heart and minds of the hundreds of ski mountaineers and the thousands of spectators.

The Pierra Menta in all its forms
To understand the Pierra you need to experience all of it, day by day, in all its nooks and crannies. There are hundreds of volunteers, from the route setters who begin in the dark of night to the course assistants who help out along the race course and during the briefing in Areche. There's the goblin priest, a certain Jacques Plassiard who, skis strapped firmly to his feet, appears in the most bizarre places along the race (including the knife-edge crests) and plays his mouth harmonica to raise the spirits of those who, for hours and for further hours, will have to give it all they've got. There's the briefing which, for athletes, locals and lovers of this enchanting corner of the world, Beaufortain, is much more than just a briefing which offers technical details about the next stage. It always holds surprises in store, with prologues and images which mix sense of humour with vertiginous images of the race. There's the Grand Mont stage, the 2686m high mountain which the athletes peak via the long and fearsome mixed ridge, certainly no plaisir outing, which then leads to the rounded summit. Up here the ski mountaineers experience the greatest emotions of all as they funnel their way through the two "wings", past the thousands of spectators armed with bells and musical instruments, their cheers lifting the athletes half a meter off the ground as 3000 voices join forces to sing and shout "olé". Then there's dinner in the various hotels or private chalets where for four days languages, experiences and friendships intertwine, from France to Poland, via Switzerland, Canada, Italy, Norway, Spain and the USA. And of course there's the award's ceremony on Sunday afteroon in Beaufort, with the joy of trophies lifted high into the sky and the applause of the spectators, bunched up on kilometre long benches, who share their backpack cuisine brought from distant countries. There's Miss Pierra Menta, awarded this year to the young Polish promises Julia Waida and Anna Figura from the Tatra mountains and who, thanks to the "clinical eye" of the jury during these four competition days, were rewarded for their smiles, their looks and their "beaux mollets". And there are Ciriel, Guy and Laurence Blanc, Jacques Perretti the extraterrestrial without antennas and many, many more who we can't remember because there are so many, all drops in the massive Pierra ocean...

Cutting-edge ski mountaineering and the Anthamatten brothers
The second stage, that which took place last Friday, was won by the Swiss team comprised of Yannik Ecoeur and Martin Anthamatten. The latter is none other that the third brother of the "award-winning company" from Zermatt, the family which has recently produced three phenomenal mountaineers who cover the entire vertical spectrum, excelling on ice, rock, mixed and ski mountaineering. Yes, last year my brother Simon won the Piolet d'Or" Martin told us. "And Samuel, our brother in the middle, is up to things, too. This year I'll see what can be done at the Patrouille des Glaciers: I'll race with Florent Troillet and Yannik Ecoeur...". Who knows, perhaps the family mantle shelf will have to be widened.