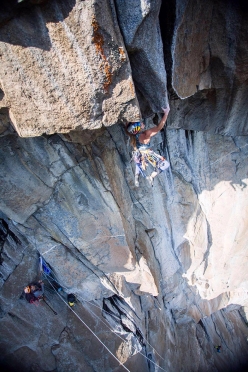 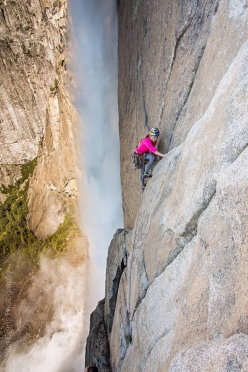 On 27 May 2017 Sasha DiGiulian and Jon Cardwell made the first free ascent of Misty Wall up the west Face of Sentinel in Yosemite, USA.

Towards the end of May American climbers Jon Cardwell and Sasha DiGiulian completed the first free ascent of Misty Wall, a 15-pitch route in Yosemite. Located immediately to the right of the raging Yosemite Upper Falls and to the left of Nicolas Favresse’s L’Appât, the route was first climbed in June 1963 by Royal Robbins and Dick McCracken and originally graded VI, 5.9, A4.

Cardwell teamed up with Marcus Garcia in autumn 2016 to work the route and although the two managed to free the individual pitches and add a spectacular direct finish through the headwall, instead of traversing left as Robbins and McCracken had done, they failed to make a one-day ascent. Cardwell returned to the route with DiGiulian in May and after working the pitches for two days the two then spent 14.5 hours making the first free ascent of the line. DiGiulian described the route as including "5.13 roof climbing, offwidth, and splitter cracks" and was, as she herself points out, her first Yosemite big wall climb.

Our line all lit! We slept at the base of this wall to get a break of dawn start on the climb. While it was too windy and cold to get much sleep, the night sky was worth it. | Shoot for the moon. Even if you miss, you'll land among the stars. | Photo: @digitalstoke Lights: @mpowerdinc (solar powered) #lightuplife #yosemite #climbing #adventure