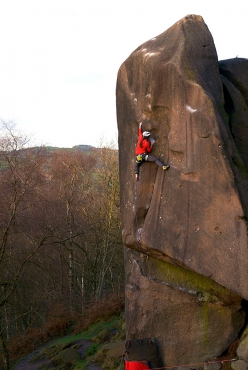 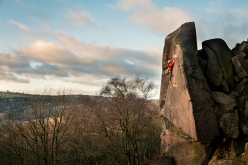 Caroline Ciavaldini climbing Gaia at Black Rocks, England, December 2020. First ascended by Johnny Dawes in 1986, this E8 6c had only been climbed by two other women previously: Lisa Rands in 2006 and Katy Whittaker in 2013.
Photo by Chris Prescott / Dark Sky Media 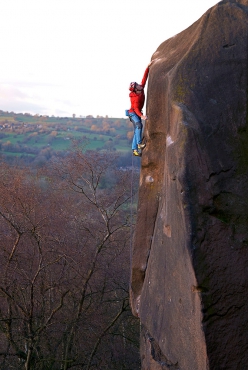 James Pearson running it out before reaching the finishing slopers Harder Faster at Black Rocks, England
Photo by David Simmonite

The video of Caroline Ciavaldini climbing Gaia and James Pearson repeating Harder, Faster at Black Rocks in the UK.

Last December the husband & wife team comprised of James Pearson and Caroline Ciavaldini pulled off two extremely important headpoints at Black Rocks in the UK, namely Harder, Faster (E9 7a) and Gaia (E8 6c). Pearson made only the third ascent of Harder, Faster in over 20 years, after Charlie Woodburn’s inspirational first ascent in 2000 and Toby Benham’s amazing repeat just three years later, while Ciavaldini pulled off the third female ascent of this 1986 Johnny Dawes masterpiece after Lisa Rands (2006) and Katy Whittaker (2013).

Here’s the footage of these rare repeats and running commentary by both Pearson and Ciavaldini that provides fascinating insight into their climbs. Don’t be fooled though by the ease with which Pearson sticks the crux - he confronted the line in a state of absolute physical and psychological perfection, without which death routes like Harder, Faster simply cannot be climbed.

Temperatures are currently dropping fast across the UK and the grit is now coming into prime conditions for hard ascents. It’ll be interesting to see what might happen this winter.

18.08.2008
James Pearson climbing interview
Interview with the English climber James Pearson, the man responsible for some of the hardest pyscholgical outings on gritstone and flashes of Font 8b boulder problems.