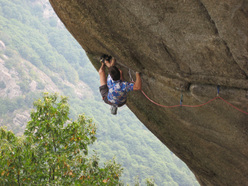 Some might consider this slightly contrived, others believe it's perfectly logical. Regardless of these thoughts, it's certainly a performance worth mentioning. We're talking about Pura Pura, the project of British crack climber Tom Randall who, after having climbed some of the hardest cracks in world (such as Century Crack and Cobra Crack) returned to Italy's Valle dell'Orco to climb the famous Greenspit once again. This time though with the sit start, i.e. by first climbing the burly boulder problem The Green Shadow.

Randall sent the boulder start tied to a rope and then continued via the extraordinary Greenspit roof and the two together create a 25m outing that Randall estimates somewhere in the region of 8c+. "The Pura Pura is not maybe what most people would envisage when they think of crack climbing as in fact it’s a combination of hard boulder and hard route climbing." explains Randall, adding "I supposed it was inspired by watching Dani Andrada in his Spanish caves contorting his way round impossible looking 9a+ link ups as a way of finding the hardest climbing possible."

As to the grade, Randall told Planetmountain "It has been really hard to commit to a grade. For me it was considerably harder than Century or Cobra Crack for example, more sustained. More my style and, what's more, I'm also on the best form of my climbing at the moment by quite a long way. It's hard to be sure though, we'll see in the future!"