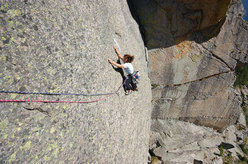 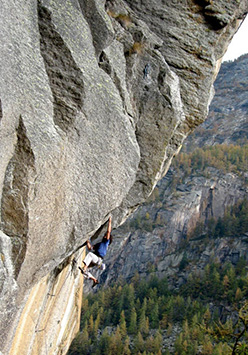 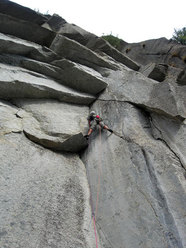 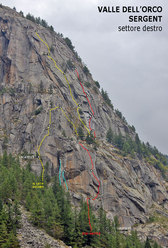 The righthand side of Sergent, Valle dell'Orco, Italy
Photo by arch. M. Oviglia

At the end of September and the start of October Maurizio Oviglia, Sara Oviglia, Paolo Seimandi and Eugenio Pinotti completed two new multi-pitch routes on the Sergent rock face in Valle Orco. They then added two single pitches to the wall and another to the Dado.

Climbers find it hard to ignore their roots. At the end of September Maurizio Oviglia gave in to temptation and returned to his breeding ground, the magnificent granite Valle del Orco, where he established a series of new routes on the historic Sergent and nearby Dado. The first is called 'Jedi Master' (190m, I/S2/6c+ max, 6b obl.), while the second multi-pitch is slightly harder and is called 'Il lato oscuro' (220m, II/S2+/6c max, 6b+ obl.) Oviglia then went on to add 3 new single pitches which are all protected with trad gear only, proving that, with a little immagination, there is still plenty of room left for development.

Oviglia commented: "It might seem exaggerated, but from my point of view there's still all to be done in the Valle dell'Orco. All you need to do is change perspective. And perhaps in climbing 4 new routes at the Sergent and Dado, two extremely well-known rock faces where everyone thought that everything had already been climbed, I wanted to prove my theory. Two multi-pitches, logical, beautiful and demanding, without being extreme... and three single pitches (which add to a further 2 climbed two years back), which certainly wouldn't be newsworthy if not for the fact that they all rely on trad gear for protection. Without wanting to hold a sermon, I believe that the Valley needs this sort of initiative. And I'm certainly not an uncensored “clean-climber”, but I have experienced first hand many of the historic moments of these rocks and the inevitable ethical dilemmas.

I'm aware of the fact that Valle dell'Oro can never be a Yosemite Valley or England. Simply - and straightforwardly - because it's there, a stone's throw from France where since the '80's we've allowed our climbing culture to mutate, for good or for bad. At least, here in NW Italy. But no one can deny that Orco has transformed into some sort of Indian Reserve, a sort of park, one of the few places (in Italy) where it is still possible to climb using nuts and friends, even on single pitches. Safeguarding this possibility, which to my mind is a heritage, is therefore everyone's duty.

Let's not render everything trivial by bolting every piece of rock, let's not retrobolt the classics with today's whim (as has often occurred in the past), let's at least keep the cracks clean... also on single pitches! Everyone has the right to express themselves as they want, but this doesn't give them the right to ignore the context they are in and to reflect, at least for a moment, before acting. I like to believe that intelligence, and not strength, is the main quality a first ascentionist possesses."

Thanks to La Sportiva, Petzl, E9 and Kong for the bolts.