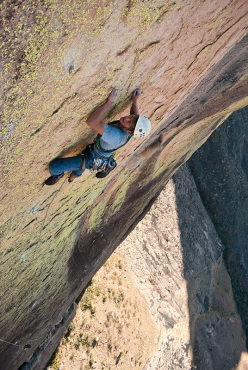 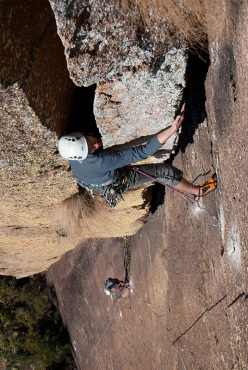 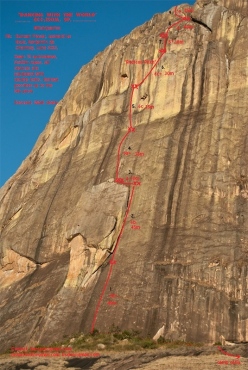 PORTFOLIO / gallery Portfolio: Tsaranoro: Dancing with the World in Madagascar

Tsaranoro: Dancing with the World in Madagascar

In June 2013 the South African climbers Duncan Fraser, Leonard le Roux and Benjamin de Charmoy made the first ascent of Dancing with the World (350m, 6c+).

The Tsaranoro massif in Madagascar continues to attract climbers from all over the world and in June 2013 the South African trio comprised of Duncan Fraser, Leonard le Roux and Benjamin de Charmoy managed to establish a new route straight up the centre of Mitsinjoarivo. The trio climbed their route over 9 days, bolting on lead and whilethe crux checks in at 6c+, some of the pitches are described as being just about "as good as it gets."

DANCING WITH THE WORLD
by Leonard le Roux

In Andringitra National Park, remote and wild rock faces of up to 800m in height loom above the surrounding hills. These superb, compact granite cliffs have attracted some of the best rock-climbers in the world. The likes of Arnaud Petit, Lynn Hill, Adam Ondra, and the prolific route opener, Michel Piola have travelled to the area to open ground breaking routes in what is often referred to as the "Yosemite of Africa." One of the most well known lines is probably Tough Enough, on the Karanbony face, which at 8c is one of the hardest big-wall routes in the world. The Tsaranoro massif is an established climbing area with many routes, so most of the obvious lines have been taken. As there are very few naturally protectable features, bolting is allowed, but a ground-up bolting ethic has developed on the main walls which most first-ascentionists have adhered to.

Deciding on which line to throw our lot with was harder than we expected, but eventually we settled on the one: a line right up the centre of Mitsinjoarivo, which at 350m is one of the smaller walls in the area, but big enough for us. We found a cave and stream at its base, and over the next two days we carried load after load of equipment and food up to what would become our base for the next nine days.

In the morning, we started up the first pitch, new to the feeling of hanging on a sky-hook balanced on a tiny crimp 3m above the last bolt, with a tired arm holding the buzzing drill level above our heads. Our 36V Bosch battery powered drill was the best tool we could hope for to suit the situation. Over the next few days, we slowly made our way up the face, Duncan braving a horrible 45m chimney-offwidth pitch which led us up to the top of a pillar on which we could leave some gear overnight. From there followed two immaculate face-pitches on perfect incut crimps. Every morning we woke up in our cave to the sun rising over a beautiful mountainous horizon across the valley. We then jugged up to the previous day’s high-point and alternating leads, edged speculatively upwards, hoping that the next pitch would not prove too difficult. All the months of planning and dreaming was finally coming together. Finally we were there where we had hoped to be, in our own world on a far-away wall, surrounded by that magical landscape and thrilled by the intensity and excitement of opening our own route.

The face pitches led us up to what we dubbed the "Rubicon Pitch", a seam of pot-sized holes in the rock leading diagonally upwards from the belay to the skyline and ending in a breathless technical traverse to a stance on a ledge. This pitch and the one preceding it were probably the best pitches of the route. From there Benj headed up another chimney pitch which led to two final easy rope-lengths to the top.

Making the next day a rest day, we climbed some single pitch routes in the valley below, shredding our arms in a crack which seemed to have sharks-teeth lining its inside, and attempting a desperate arête "the best unclimbed arête in Madagascar", which Benj made some progress on, but we eventually left for next time. We then set out to climb our whole route free in a day, which we did without incident, each climbing the pitches he bolted. This was immensely satisfying, but after the summit photographs and the bundu-bash to the cave, we were happy to carry our bags down to Camp Catta and have a couple of Three Horses beers in the bar. After another day ,we started the long journey back to Antananarivo, and three days later landed at O.R Thambo, the international airport at Johannesburg and a world away from Tsaranoro, Benj and I two days late for Uni, and Duncan heading straight for work.

Trips to faraway places are easy to dream up but hard to realize. This one was no exception and could never have happened without the enthusiastic support of the MCSA Supertramp Award, the Mountain Club of South Africa, the University of Cape Town, Bosch Power Tools, Beal and Black Diamond. A special thank you is also due to Simon Larsen, Alec McKirdy, Andrew Pedley and Jimbo Smith for help and advice. Lastly, we are grateful that a place like Tsaranoro exists and hope it remains as wild as it was for us.