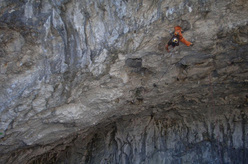 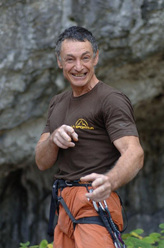 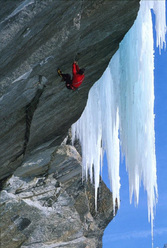 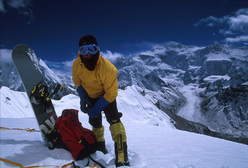 Stevie Haston and his other great passion, snowboarding.
Photo by Laurence Goualt Haston

Interview with British climber Steve Haston after his recent first ascent of Descente Lolitta at the Grotte de Sabart in Ariege, France.

A few weeks ago British climber Stevie Haston made the first ascent of Descente Lolitta, an ultra-steep 30m outing through the Grotte de Sabart in Ariege, France. Haston believes this latest creation to be 9a, which not only brings him alongside only a handfew of British climbers who have mastered this grade, but also among the select few who have reached this magical number at the tender age of over half a century.

For those in the know, Stevie's ascent comes as no great surprise. Always at the cutting-edge of climbing since his early teens, his vertical curriculum spans from winter ascents of great classics (read North Face of the Eiger and the first solo of on the Walker Spur) via hard British trad and extreme European sport routes. After having gained his mixed apprenticeship on ground-breaking routes such as Pinocchio M6+ and Scotch on the Rocks M7 on Mont Blanc du Tacul in the mid '90's, at the turn of the millennium he explored the limits of drytooling with ascents such as the Empire Strikes Back M10+/M11 in Italy's Valsavaranche.

Based in French Pyrennes with his wife Laurence Gouault, Stevie Haston is an explosive mix of raw power, refined technique, nerves of steel and an acute opinion on the various aspects of this vertical game. We checked in with the man himself to find out more.

Interview Stevie Haston
Stevie - congratulations for this ascent. Ho important do you rate this achievement?
This is very important for me! The route has a hard bouldering element and an athletic side so it is not just stamina or linkage. On the world scale I make no pretence, I know just how good say Patxi Usobiaga is, or how powerful say Ramonette Puigblanque is, not to mention many others. But my 9a is an interesting achievement just like if a 14 year old does it. I won't say it made me happy to do 9a but I was pleased with this. Climbing excellent routes makes me happy in the same way swimming in a good spot with fish does, if you know what I mean.

Success has come about now and not say 10 years ago. What do you put this down to?
10 years ago I used to spend the winters snowboarding for pleasure (which means big muscles in the legs) and since I was doing much high altitude climbing I never had more than two months at a time to devote to pure rock climbing. I had many injuries (5 knee operations) and also had to do too much work for sponsors. Now I have no money but plenty of time - ha ha.

9a is (presumably) pretty much cutting edge. In few other sports this limit can be mastered by such as large age gap - how do you explain this?
Climbing basically is a power to weight sport with a high element of skill, it favours people with low muscle bulk so their fingers don't get hurt and people who have high motor skills. This shouldn't discriminate against the young, women or obviously the old (like me). I think other sports are similar but we have a few very passionate people in climbing who are doing well and reminding us not to use stupidity or perceived wisdom as truth.

Where do you feel is sport climbing heading?
Somewhere very interesting, I predicted three generations on a 9a a few years ago in an article I wrote, but there is much I do not know and, having seen Ramonette climb, I think 9c is possible for the gifted who train with method.

A few weeks ago you first ascended a loose E8 in Wales. The styles couldn't be more different. But which one tested you more?
Bravo, interesting question. The route Bam Bam in Wales was the harder for me. Maybe my engagement skills are rusty and of course you can die on Bam Bam which obviously makes a big difference, I did however climb Bam Bam like a very strong robot while on the 9a I made a few mistakes. Perhaps I can climb harder. If I have particular gifts, then they are maintaining a fairly calm head in times of danger and knowing what is required for success athletically.

You've been away from Britain for a long time - how do you view the British climbing scene now, with your continental perspective?
The Brits in the late eighties and early nineties were pretty much on top, but that has changed badly. Living on the continent, especially in France, you are never short of someone to teach you how to climb better. I see some of the best and try to learn. Four years ago on the same cliff as Bam Bam I did two routes they might be E9 and E10, I was only able to do this because my skills continue to develop. I have lost faith in the British grading system. I prefer to think of them as very dangerous 7c+ with some poor rock and a big chance of hitting the ground. The British scene is now very hyped with few elite climbers, the old skills that Brits were famous for are not keeping up with real athletic standards, there are some good climbers operating, but not that many and they are too conceited. You know an E8 in the Peak District can be four meters high! There is a lot of nonsense in the climbing world, not just in Britain. If you taught Ondra to use nuts (and he would obviously learn in about five minutes, he's very clever) he would do most of the hard routes very easily as would any of his contemporaries - I believe the Brits don't want to accept this. Having said that, the climbing available in Britain is still wonderfully varied, with sea cliffs, small mountain crags and some good sport climbing. I would climb there more but the weather and food are terrible. Actually I think that's why we used to be so good, the food is truly poisonous, inedible. It's easy to stay thin!

You're name is intrinsically linked to dry tooling. This seems to have slowed down a touch in recent years - is this really the case and what has it brought about?
Yes it has slowed down, there is not as much money around and it reached a very high level in the blink of an eye, but look at the people involved - hardly also rans. Dry tooling - I prefer the term mixed climbing - has changed are perceptions of what is possible and made winter climbing more interesting. Some of the mixed routes are master pieces in a sporting and aesthetic sense.

How important is the other person at the end of the rope that you tie in to?
For me, that person is vital. I can climb with very few people, actually I can't work or even be with many people, but the cord is a sacred thing to me, as is friendship. On the engaged routes your partner can make or break you, one bad vibe or even too much care will spell disaster.

You excel in pretty much everything you do. Is there something Stevie Haston hasn't yet done?
There are many things I haven't done even in climbing, and many other more important things too. But I try, which I think is very important, and the climb Bam Bam (the name of my grandchild) reminded me of this. Trying is very important.